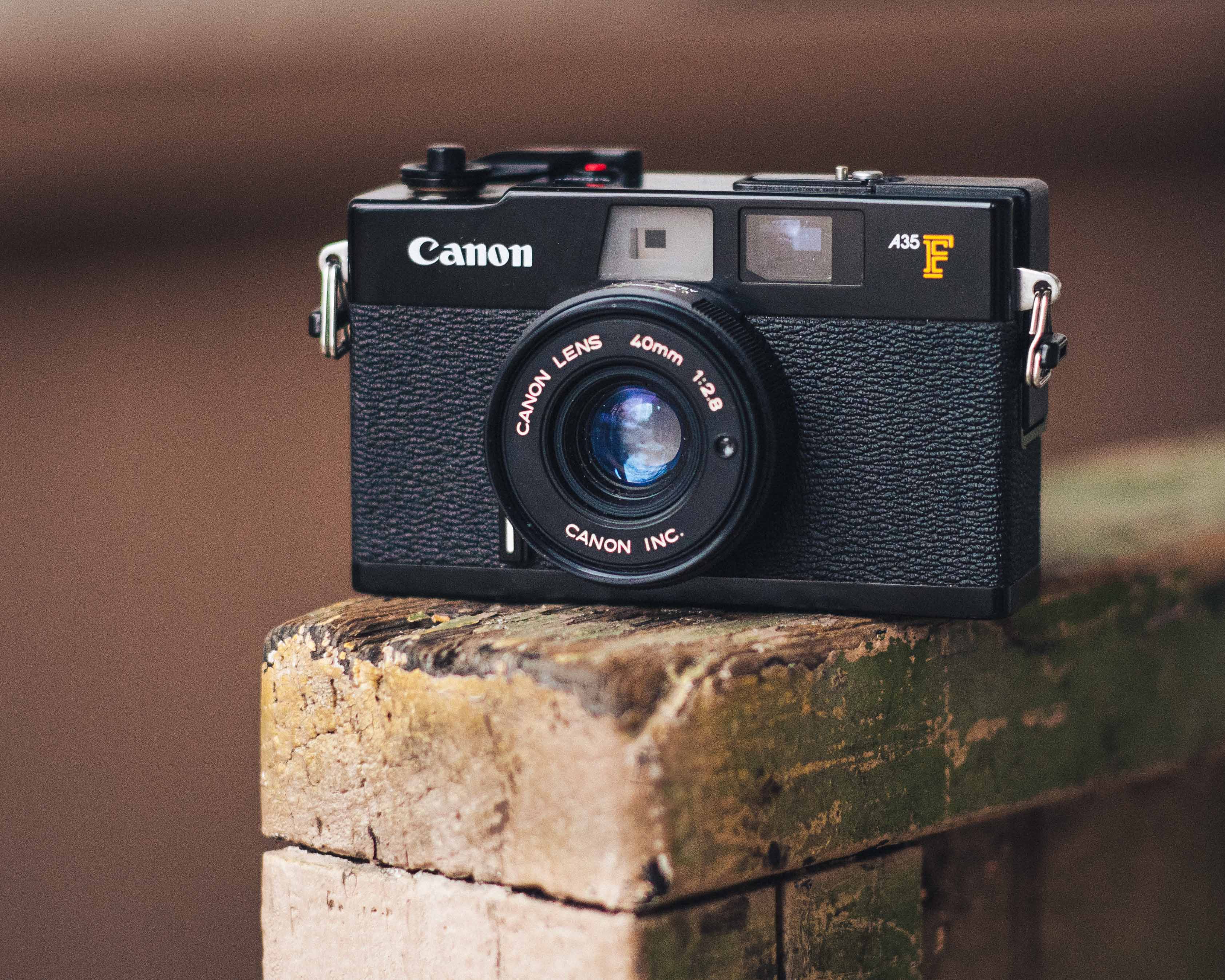 Released in 1978, the Canon A35F is a fun little auto-exposure rangefinder camera, and one of the first Canon cameras to feature built-in flash. I bought mine as part of a huge lot of cameras from an auction, and decided to test it out before selling it.

The A35F comes equipped with a fairly fast and decently sharp 40mm f/2.8 lens. 40mm is my personal favorite focal length, providing a standard, if ever-so-slightly wide field of view that I find to be extremely versatile. At f/2.8, the A35F can give you some nice shallow depth of field -- not that you have much control over the aperture of the lens, since the camera is entirely automatic.

Based on the amount of light in the scene, the camera automatically selects a shutter speed and aperture combination to best expose the film, which can be rated anywhere between 25 and 400 ISO. Shutter speeds range from 1/60 to 1/320, while apertures span from f/2.8 to f/20. With your eye to the finder, a little needle points to the aperture the camera will use, depending on the intensity of the light. If there is not enough light for the camera to make an exposure, the shutter will refuse to fire.  There is no option for long exposures with the A35F. Instead, the pop-up flash must be utilized. The flash is popped up manually via a little switch on the back of the camera. Once up, the flash turns on and begins to charge, which takes around 7 seconds or so. A little orange light turns on when the flash is ready to go. The camera then automatically selects the correct aperture for the flash to fire at based on the distance at which the lens is currently focused. All my flash photos were nicely exposed! 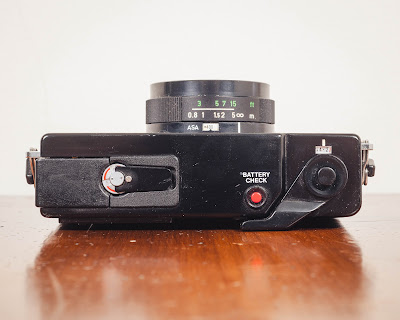 Focusing is manual, via a rangefinder system. The rangefinder patch in the viewfinder is nice and bright, which made focusing easy, even in dimly lit interiors. The lens can focus as close as 0.8 meters (2.62 feet), which is pretty good for a point and shoot! Film loading, advancing, and rewinding are all done manually. The rewind crank is nicely designed, featuring a little indicator to show if your film is properly advancing out of the canister.

Overall, the A35F is an enjoyable camera to use for casual snapshots. The only annoying thing about it is that it takes those old 1.35 volt mercury cells, which are not available anymore. Instead, I used an Exell 1.35-Volt Zinc Air Coin Cell Battery, which can be bought off Amazon here. The A35F was soon replaced a year after its release by the high tech autofocusing AF35M camera (which I looked at here), so the poor A35F is rarely talked about these days. That said, if you want a fun point and shoot with manual focus control, the A35F could be the camera for you! Below are a few photos I made with the A35F at my sister-in-law's birthday party. The film was Ilford HP5+. 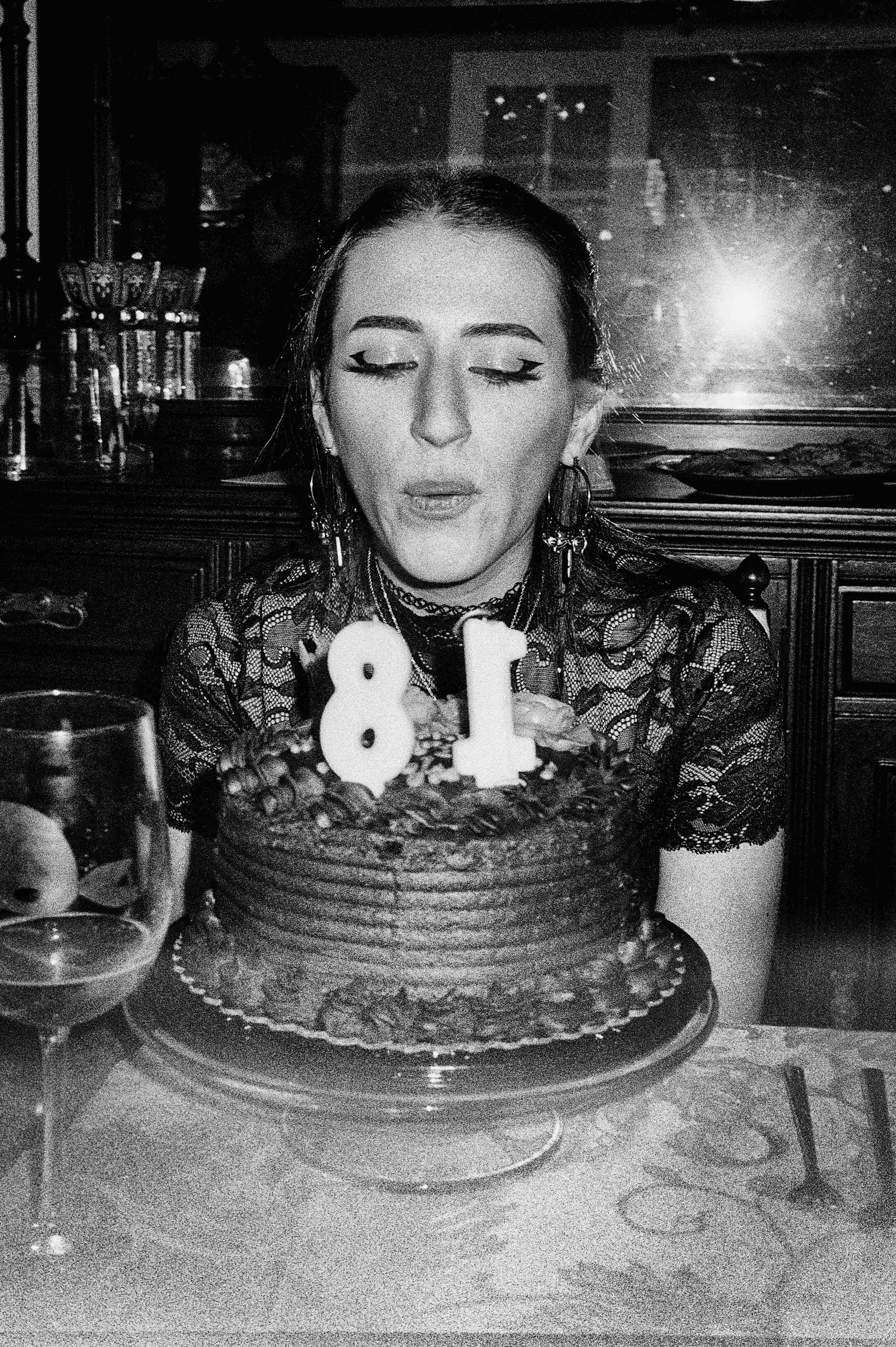 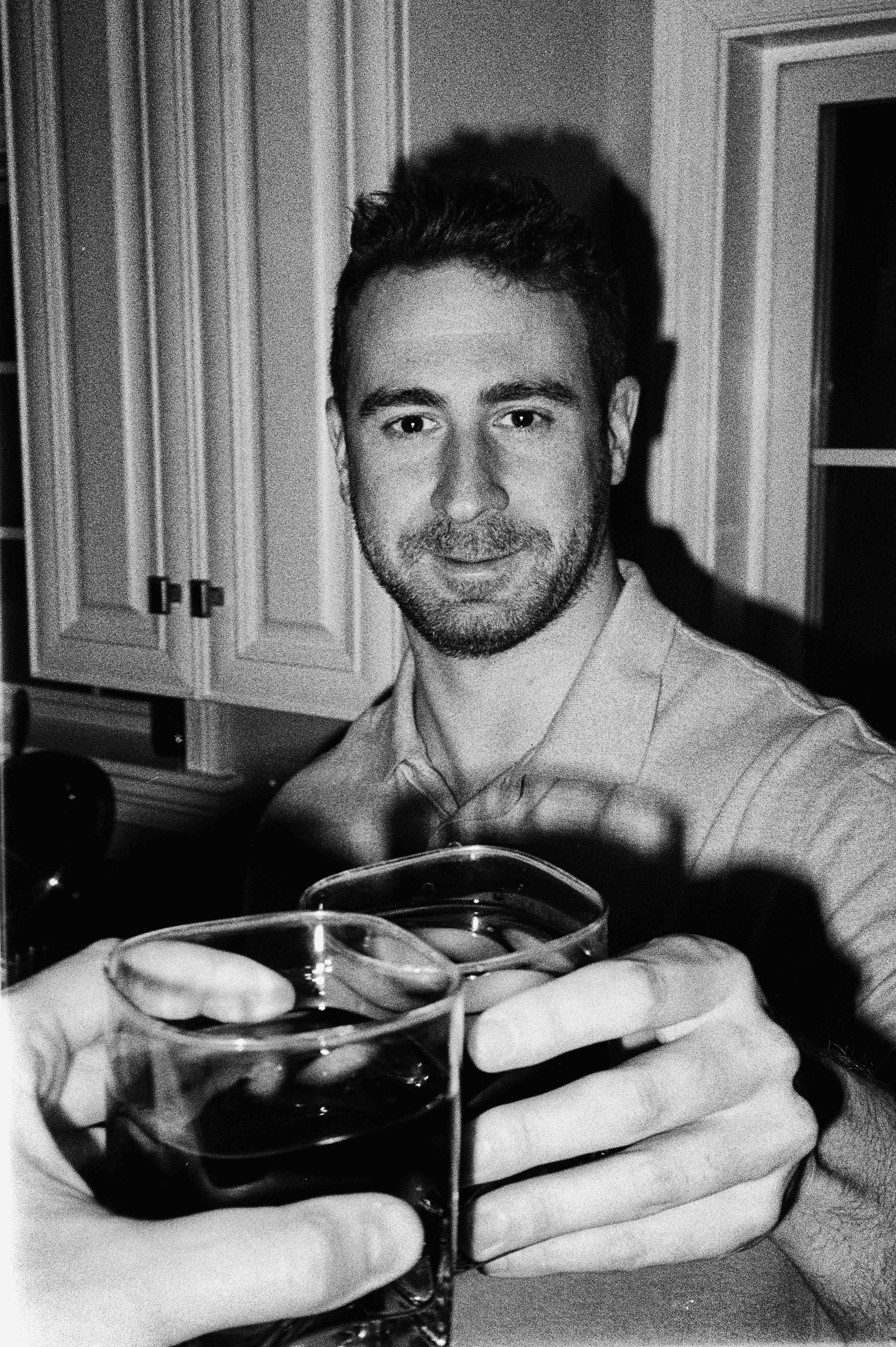 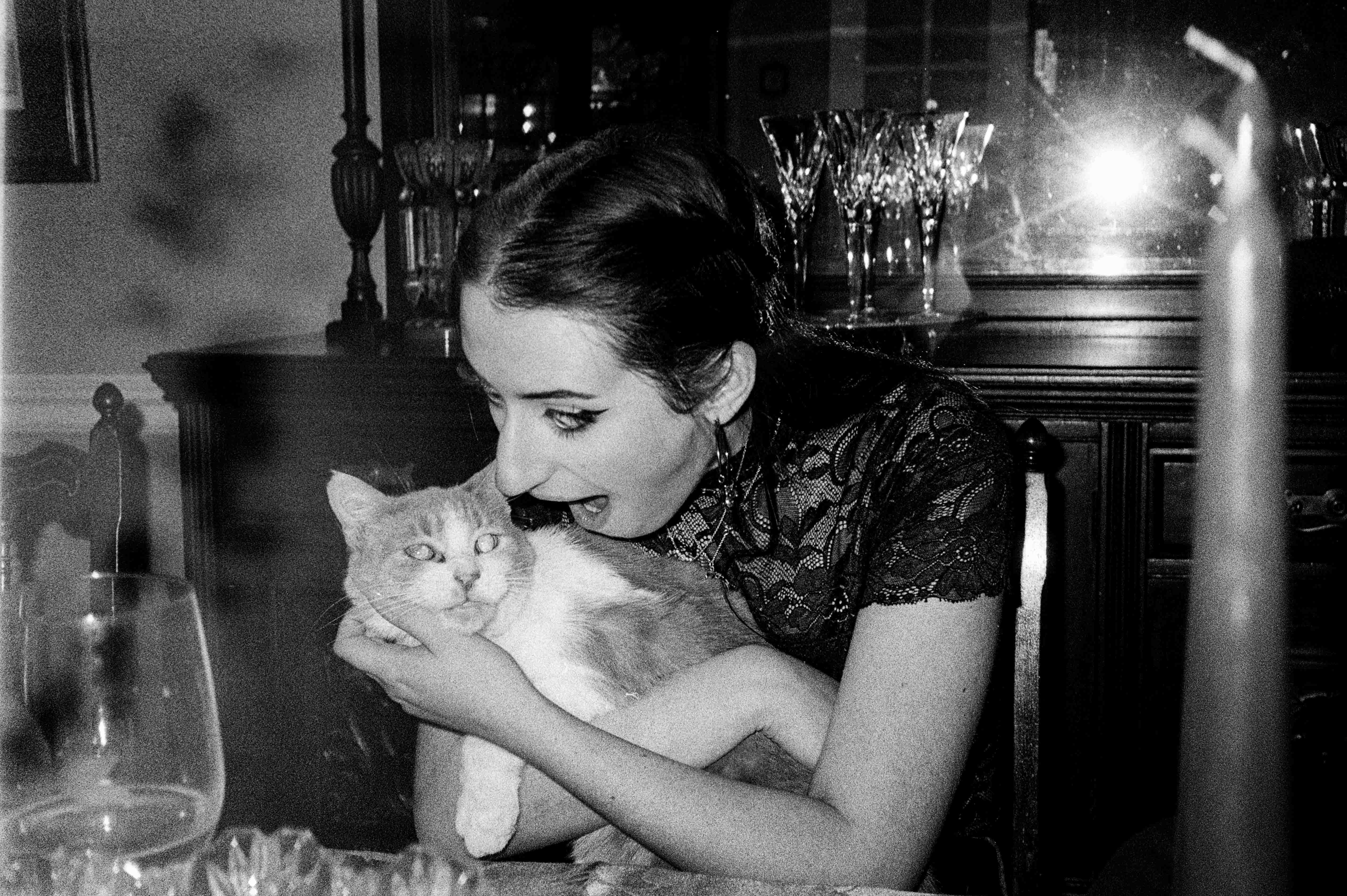 Collage: Am I Even Here? 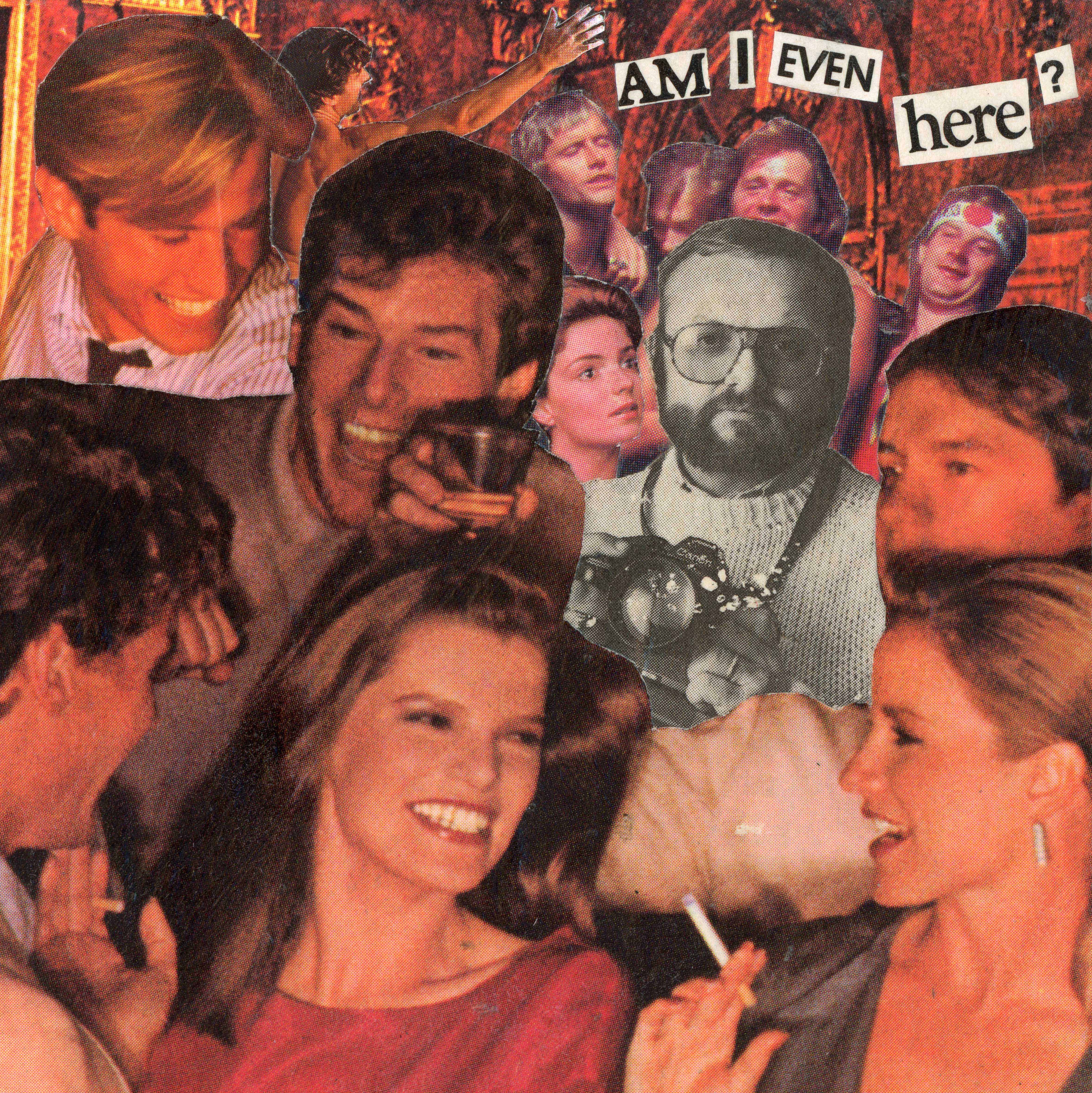 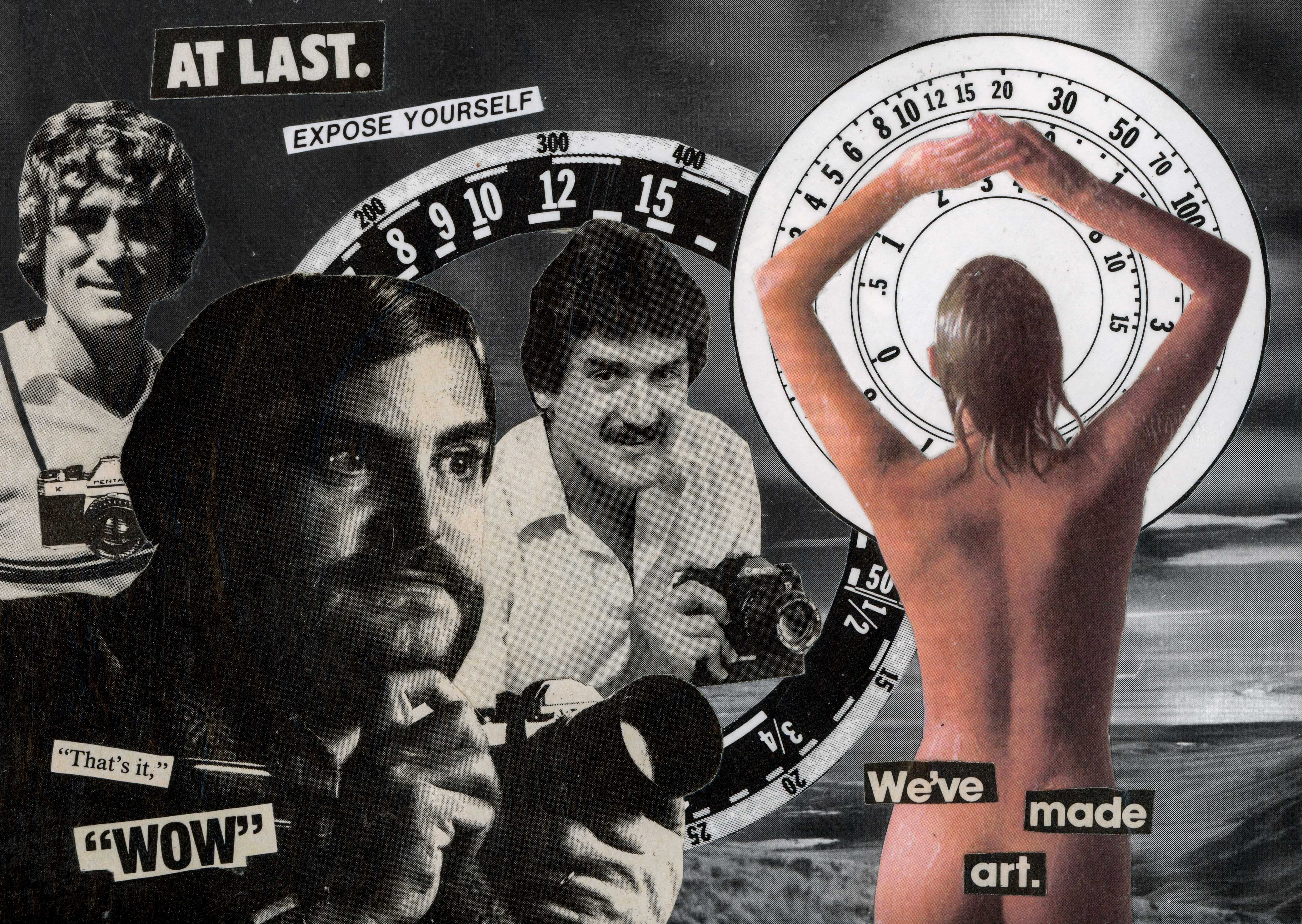 Cameramen, Collage on board, 5x7 inches 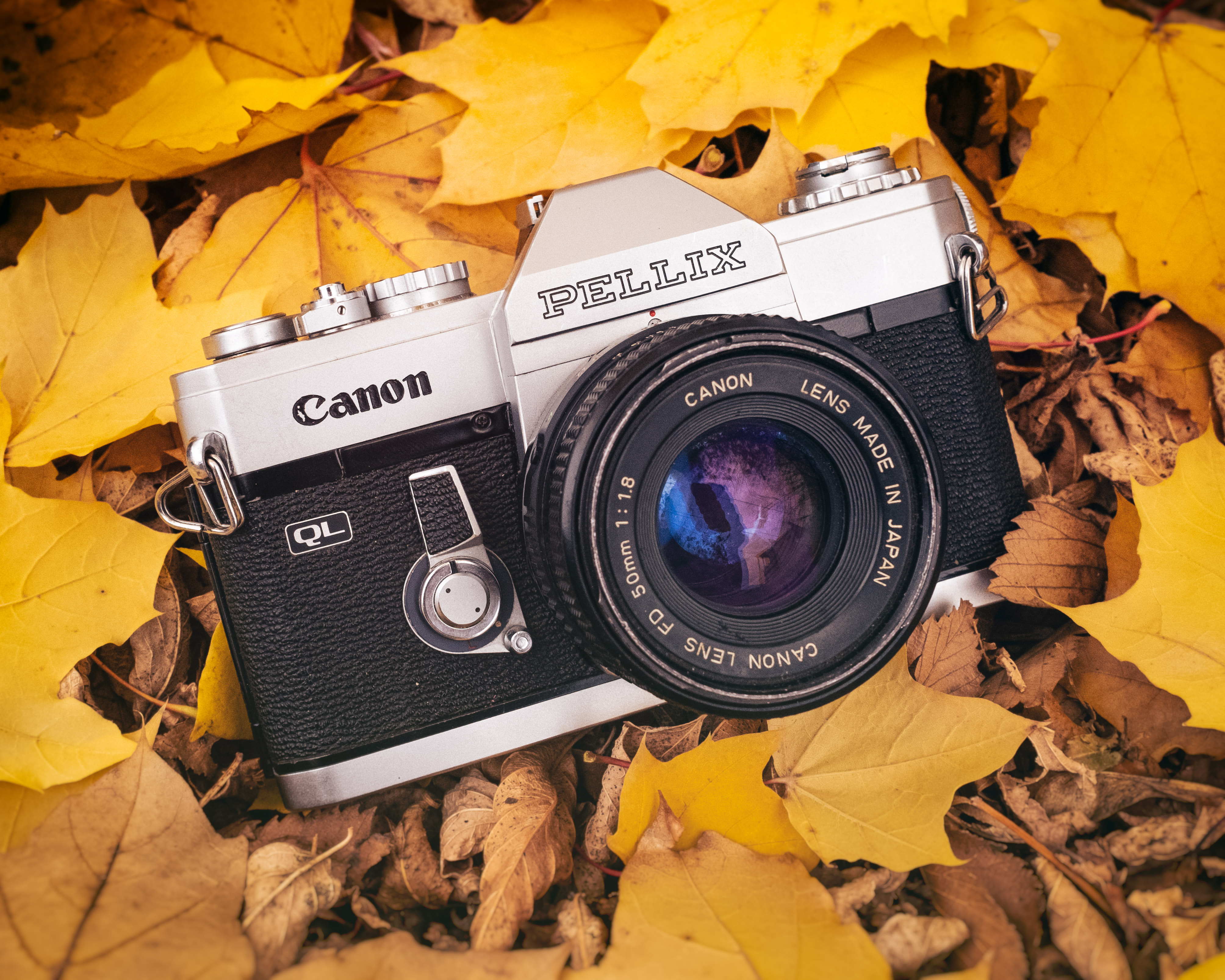 1965's Canon Pellix is a fairly standard 35mm SLR with one unique gimmick: the viewfinder doesn't black out when the shutter is fired! To manage this, The camera makes use of an ultra thin, semi-transparent pellicle mirror (hence, Pellix) that simultaneously transmits light to the film and to the finder. The mirror is fixed, so it doesn't flip up when the shutter is tripped, and you don't lose sight of your subject during the moment of exposure. The lack of mirror movement also limits vibrations during operation, which might help reduce camera shake a little bit. It's pretty weird when you've used SLR's your entire life, and you're used to the momentary blackout and mirror slap. At first it feels like the camera is broken!
There are a few drawbacks to the pellicle mirror system. Since light entering the camera is effectively split by the mirror, the finder is a bit darker than with a typical SLR. Focusing can be a little difficult in lower light, but it's not horrible with a fast prime lens. I can't imagine using this camera with zooms, though. The mirror also causes less light to be transmitted to the film, resulting in half a stop of light loss, which you need to compensate for if you're using an external meter. I totally forgot to do this, so some of my negatives came out looking a little thin. The mirror is also very fragile since it's so thin, and nearly impossible to clean. If it gets dirty, it can conceivably affect image quality, since it's always between the lens and the film. I bought my Pellix for super cheap because it had a dirty mirror. Image quality still seemed fine, but I was using very wide apertures for most of my shots. Dust and grime on the mirror might affect images when using a narrow aperture.
Shooting with narrow apertures also pretty much gets rid of the pellicle mirror advantage, because the finder still gets very dark when the lens stops down. If you're shooting at f/5.6 or narrower, you may as well be using a tradition mirror. But, for shooting subjects at wide apertures, the Pellix is a fun, gimmicky camera. 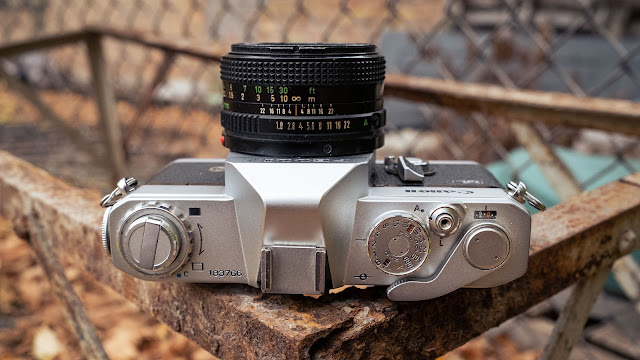 Aside from the mirror, the Pellix is a typical SLR camera, with all the basic features you could expect to find on a mechanical camera of the era. There's a standard range of shutter speeds (1-1/1000 plus B), a match-needle exposure meter, and a self-timer/depth of field preview switch. The finder and focusing screen are fixed. The Pellix does feature Canon's QL (quick load) system, which makes loading film extremely simple.
Overall I would not recommend the Pellix to anyone except for collectors or geeks like myself. The finder is just a bit too dark. Pellix finders are also prone to de-silvering, which adds to composing and focusing woes. I had to buy and return three Pellix cameras before I found one that didn't cap at speeds above 1/125th of a second, so their shutters don't seem very dependable. All that said, I still enjoyed using the Pellix, if only for the pellicle mirror novelty. Below are some photos I made with the Pellix using a 50mm f/1.8 Canon lens and Arista EDU 400 film. 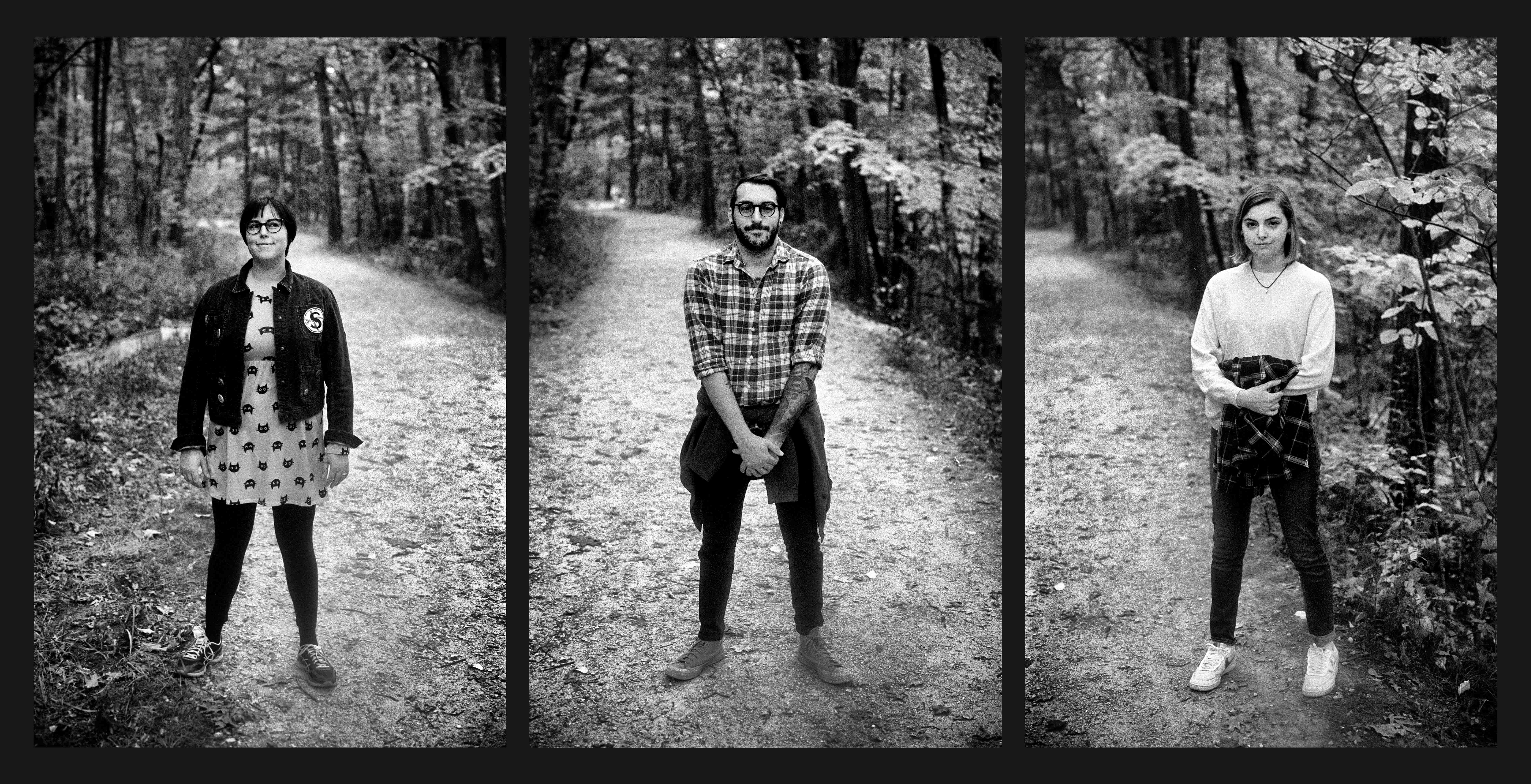 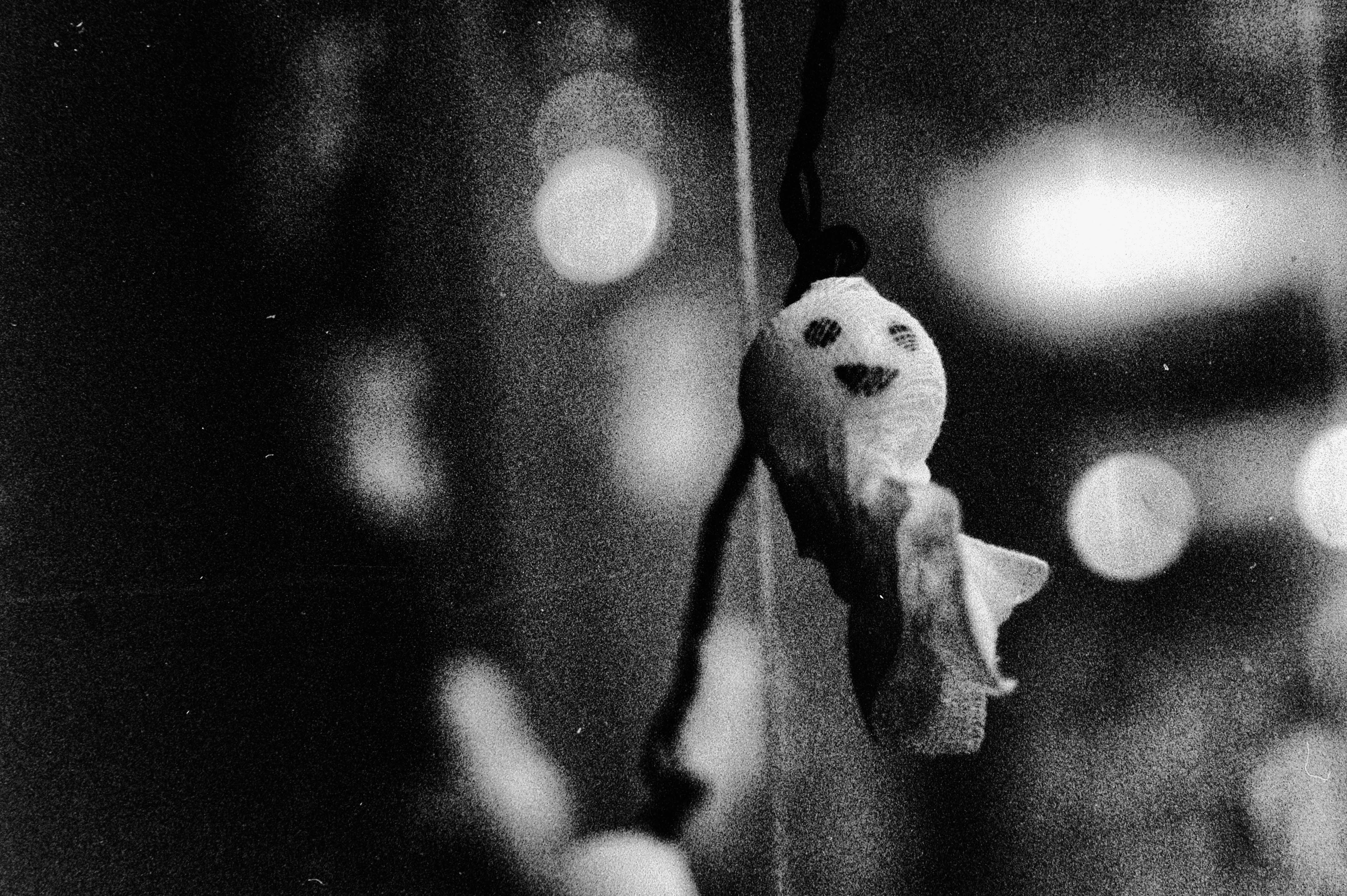 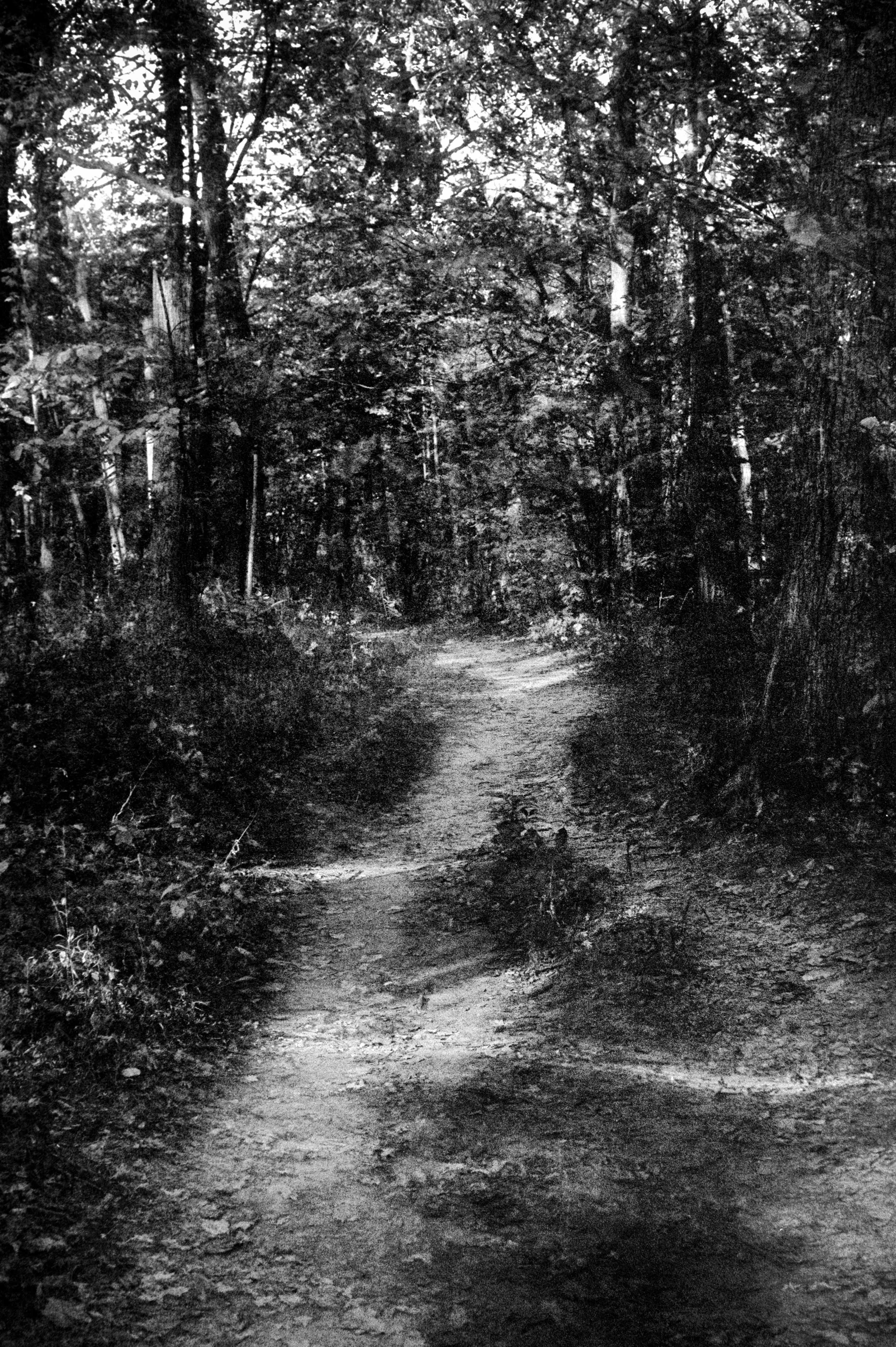 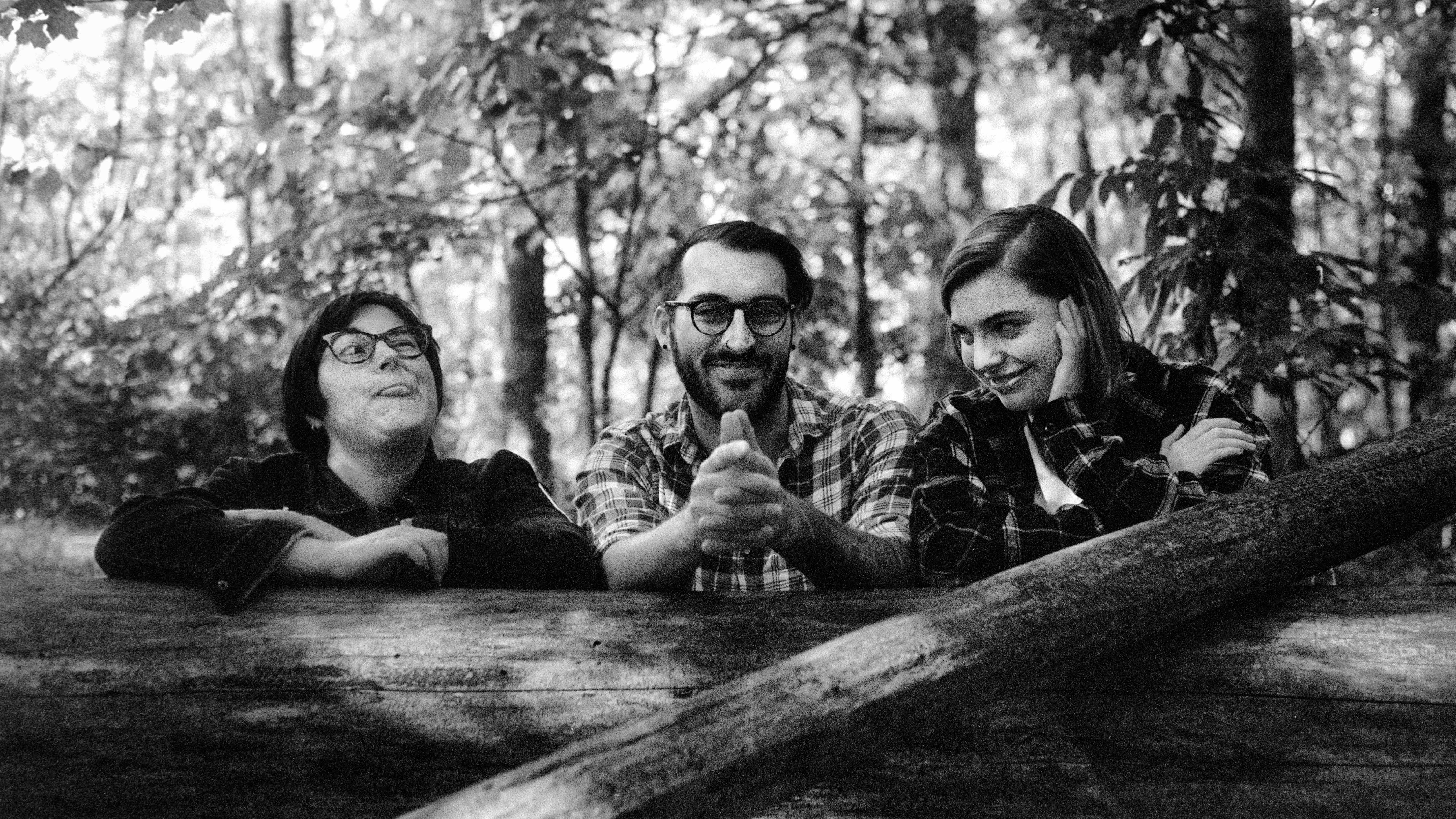 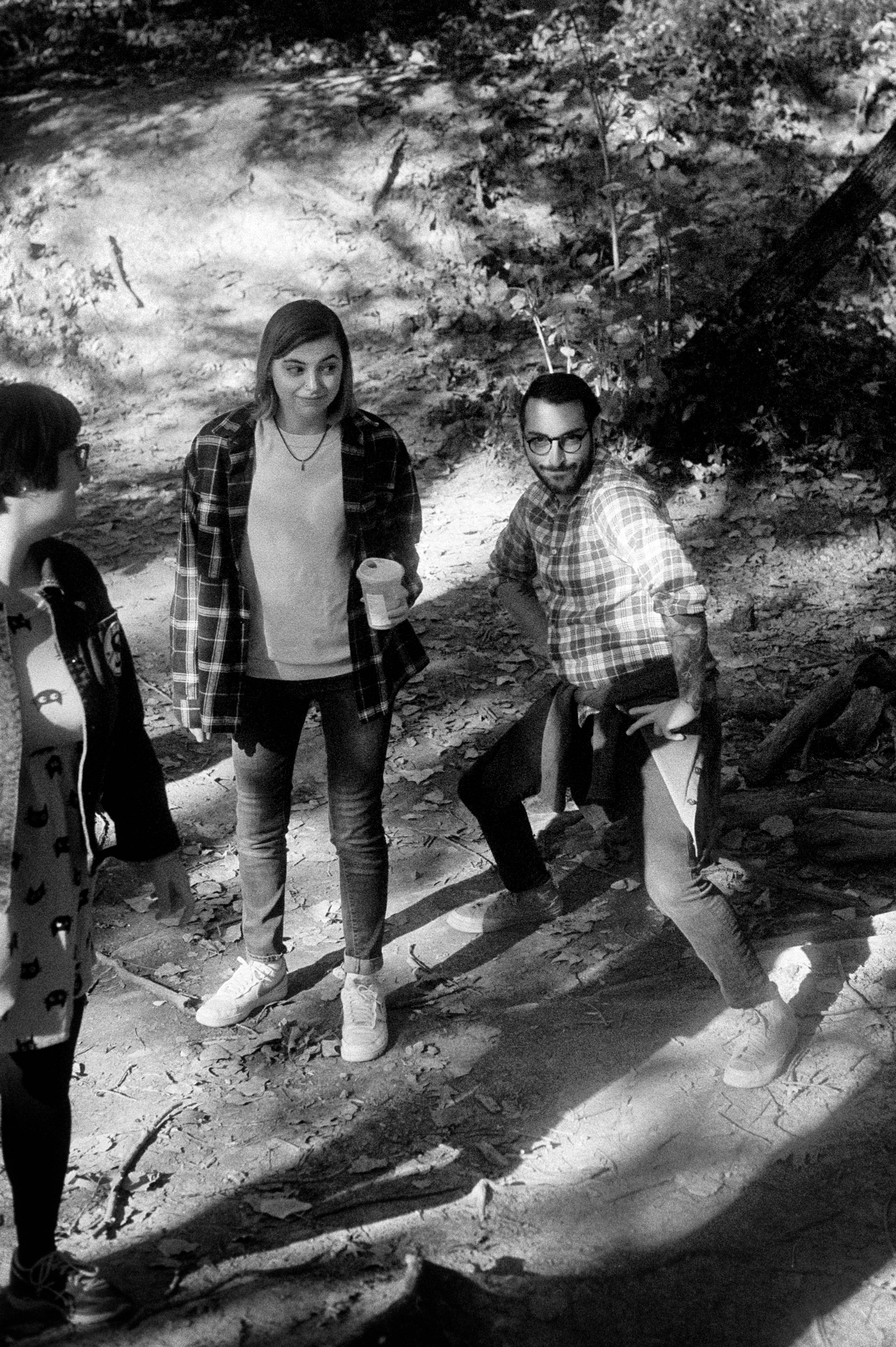 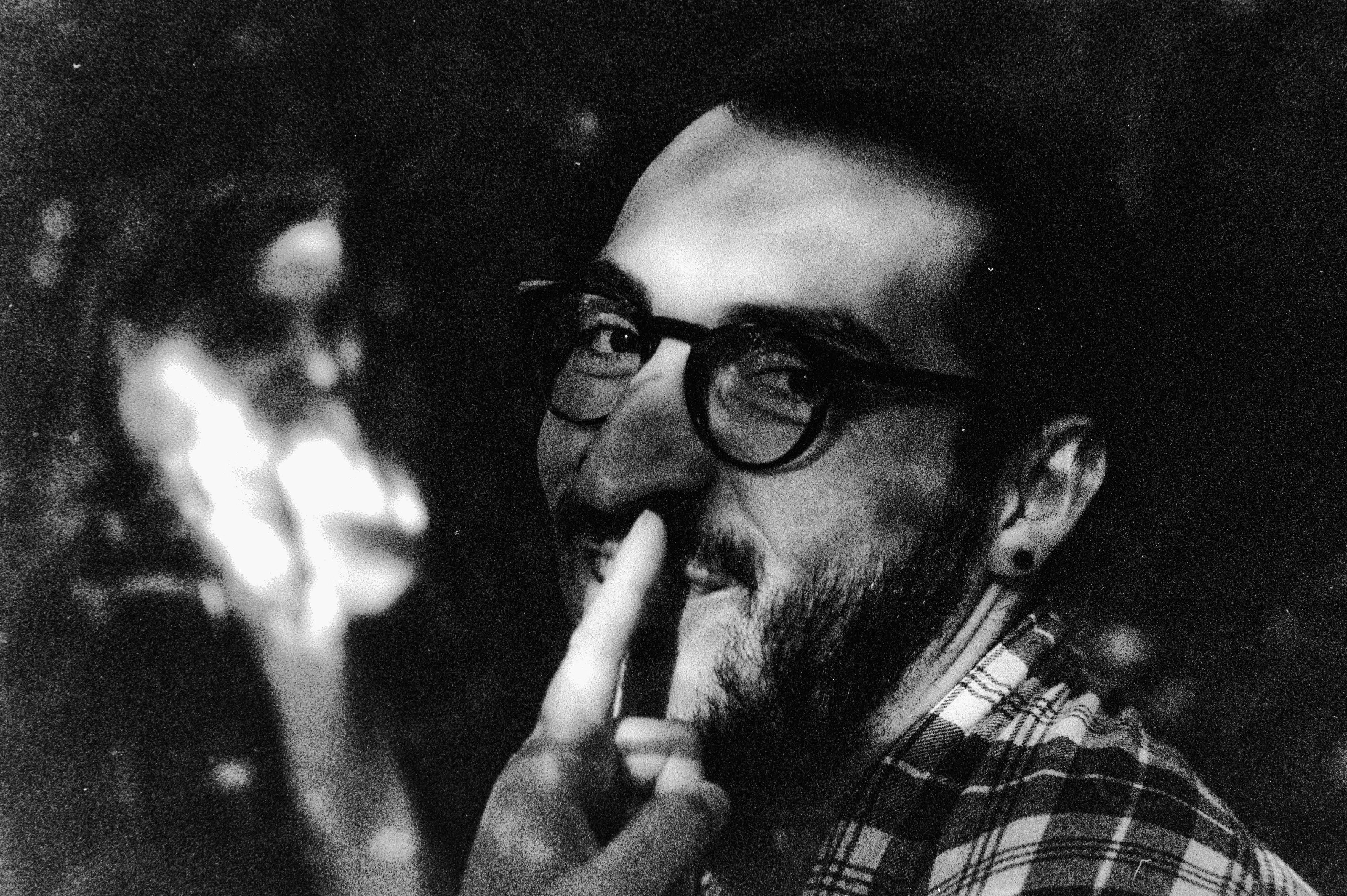 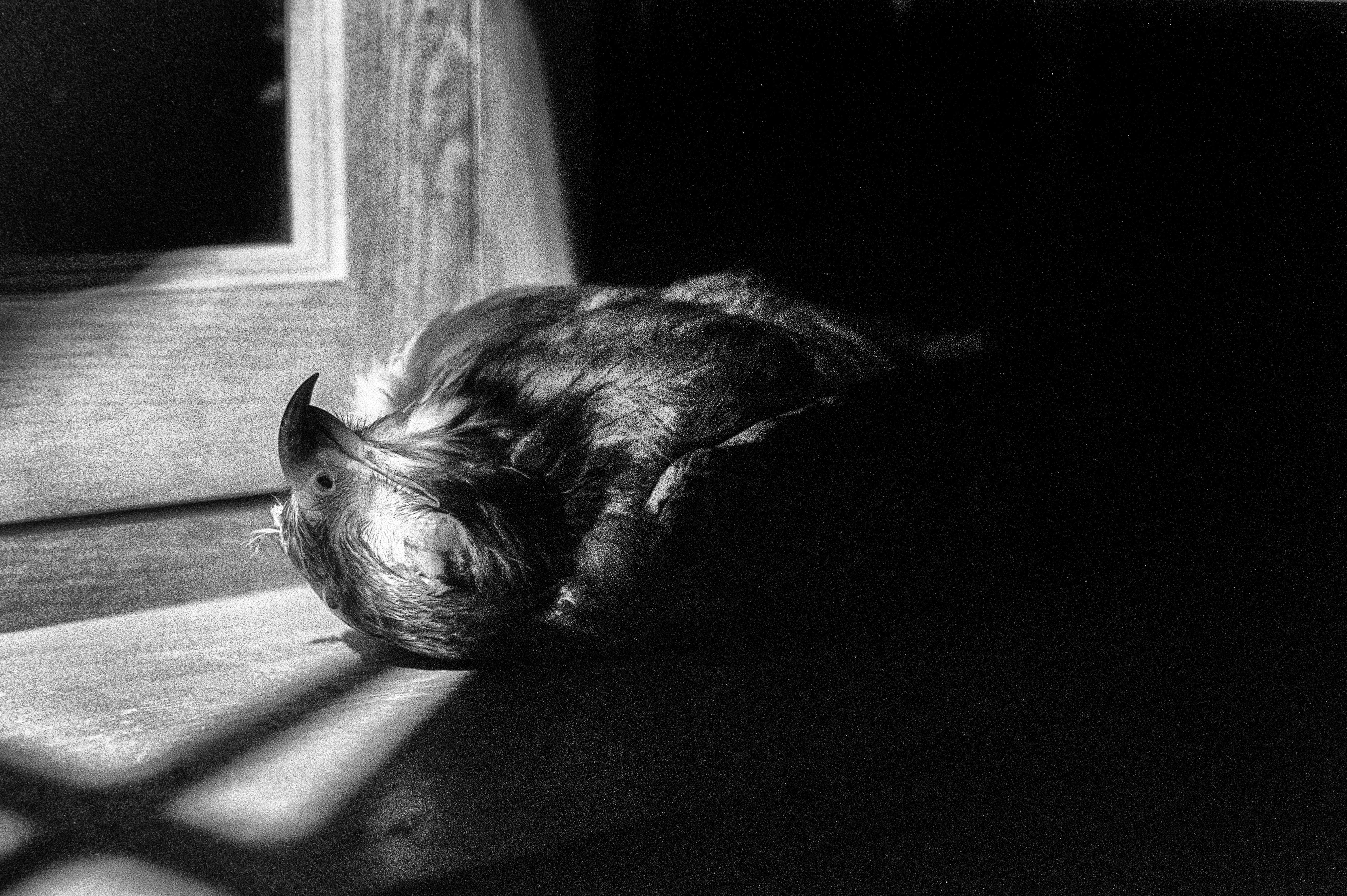 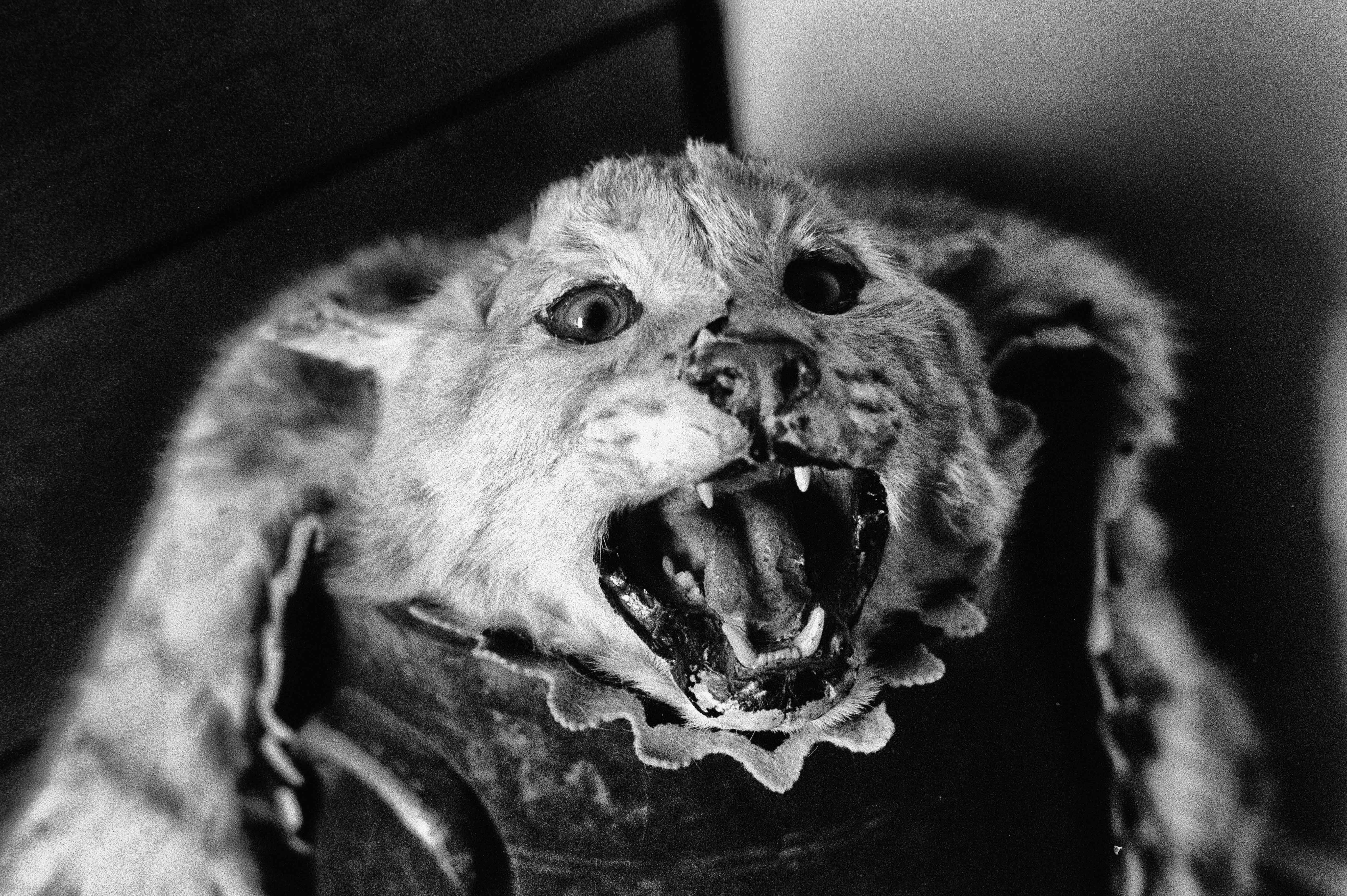 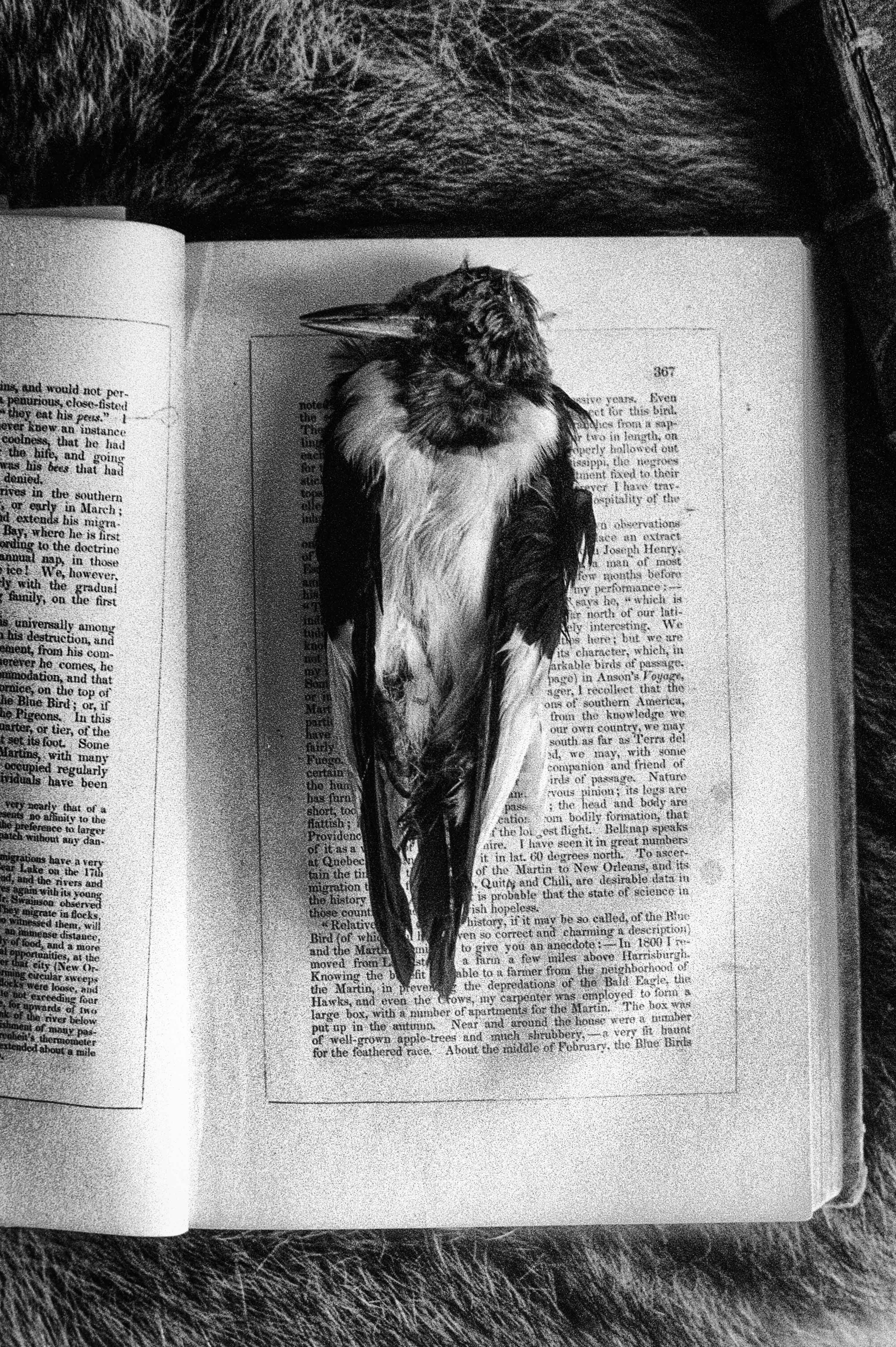 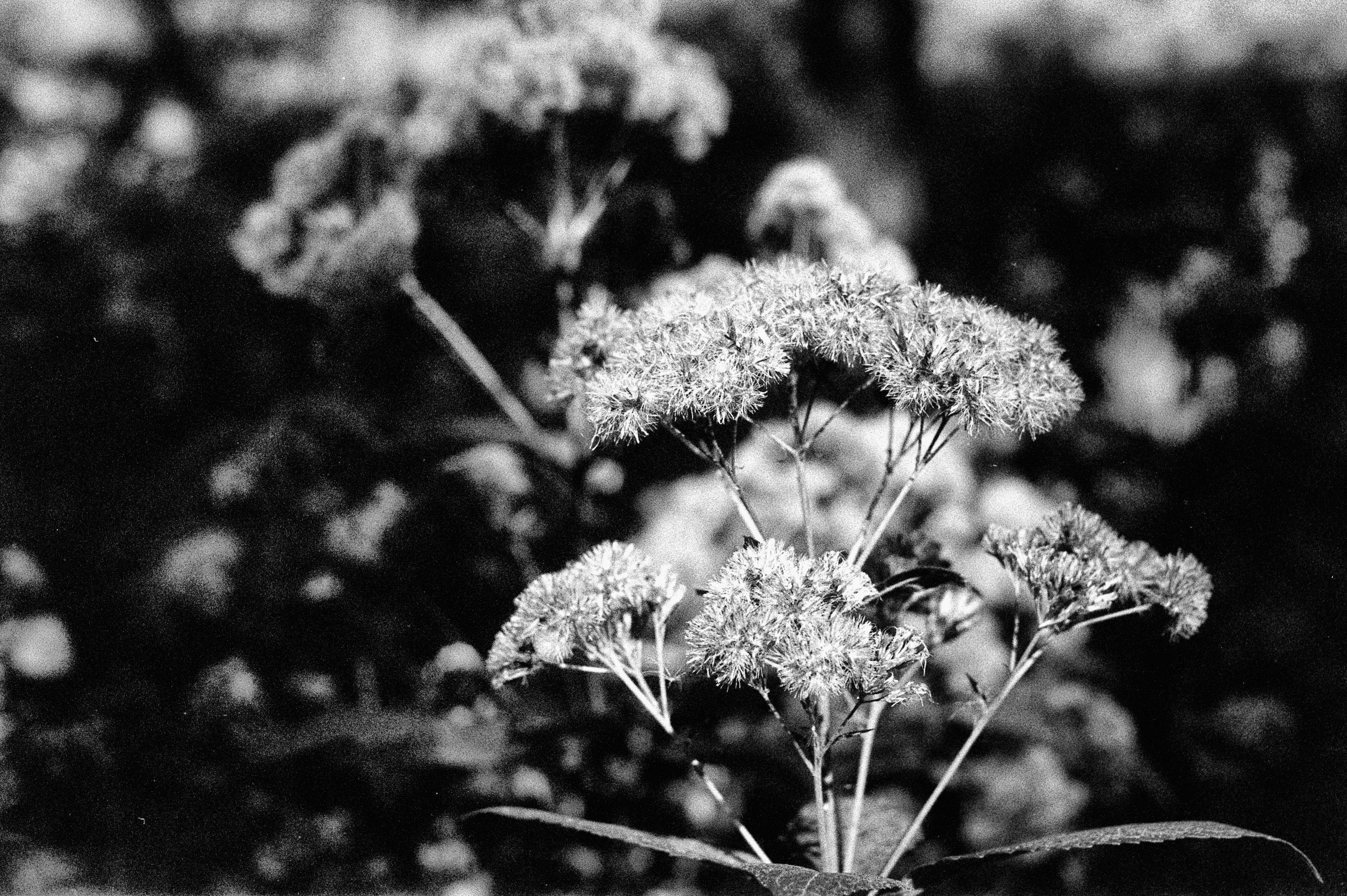 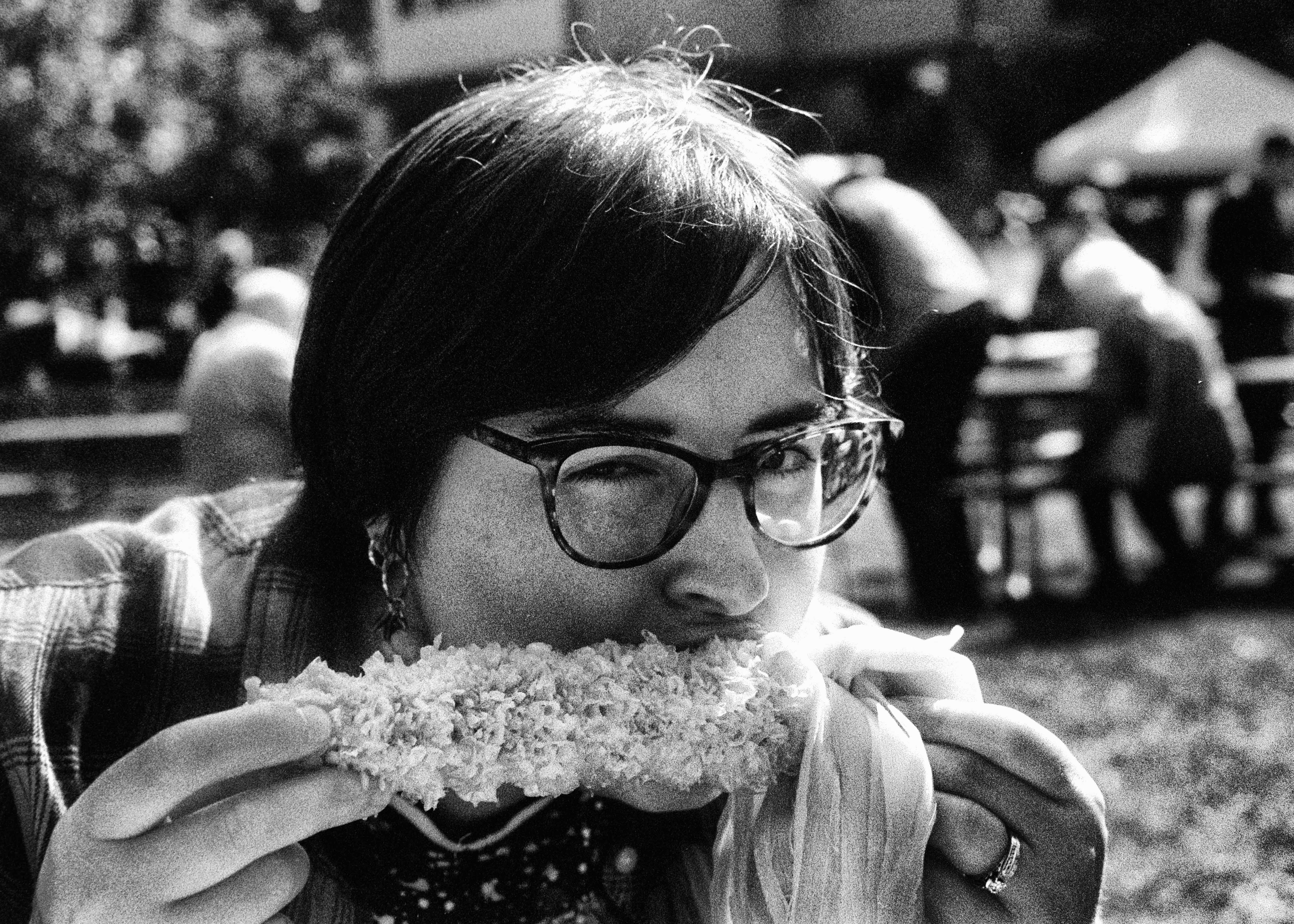 I made this pinhole photo of my Beetle as an example for my Evanston Art Center darkroom class last weekend. I'm a fan of how it turned out! 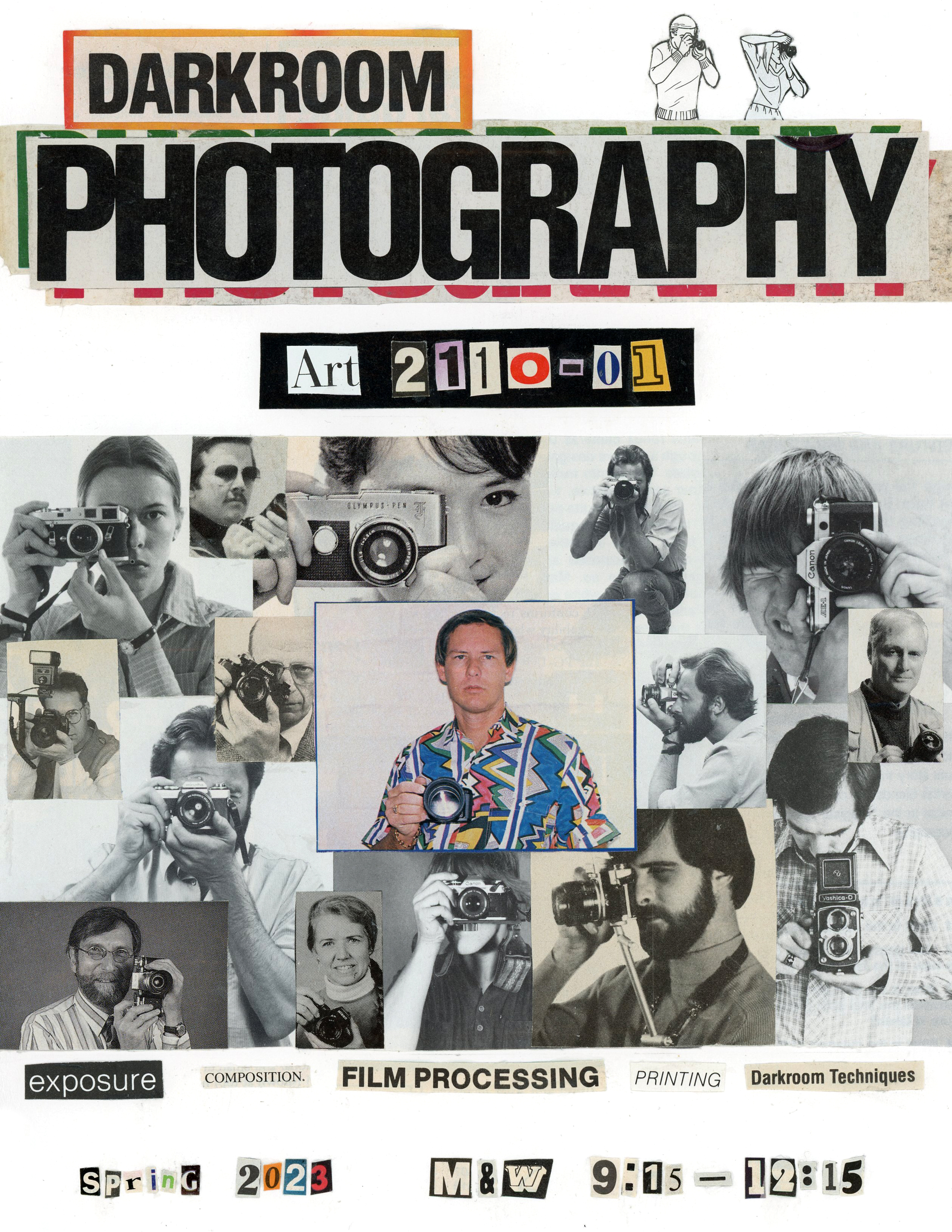 A promotional poster collage I made for my darkroom class this spring at Carthage College. All material taken from vintage photo magazines. 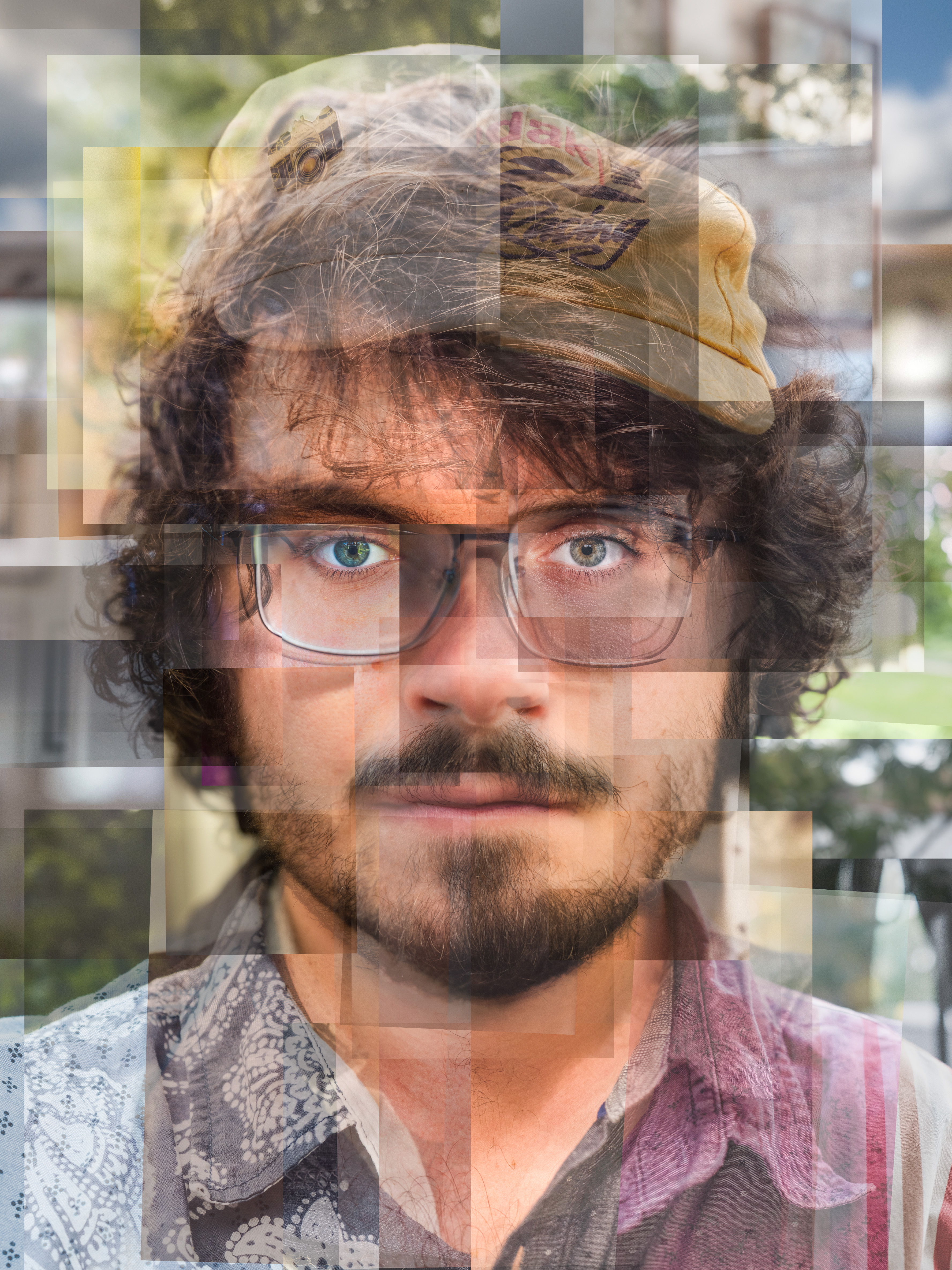