Photograph: "I Walked to the Coffee Shop, but it was Closed" 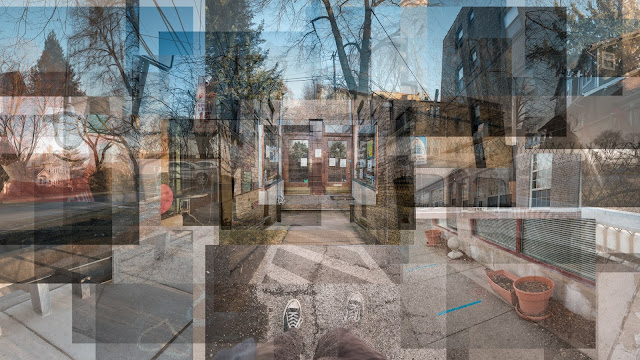 Ugh. This has happened way too many times with Coffee Lab.

Merry Catsmas! I've been working a lot with graphite pencils lately, and decided to make a few cat portraits for my family members this Christmas. Each drawing is 6x6 inches. 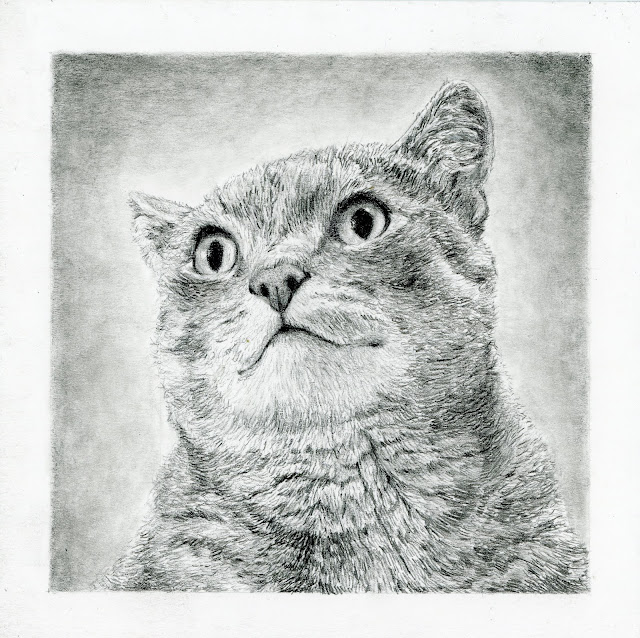 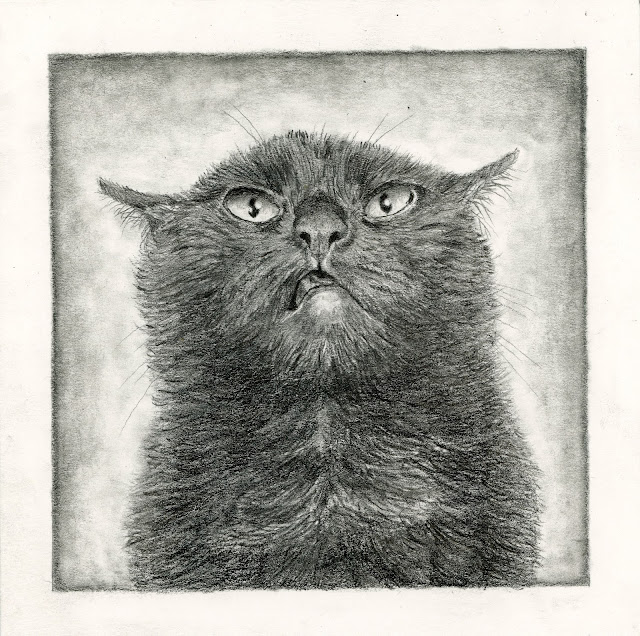 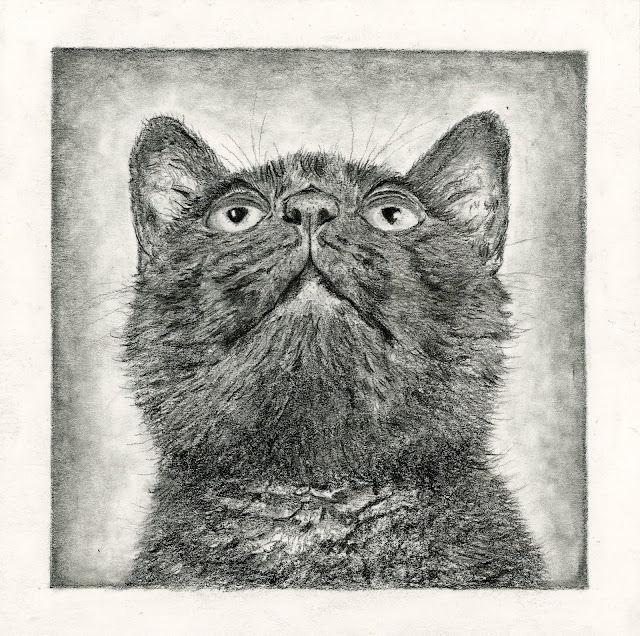 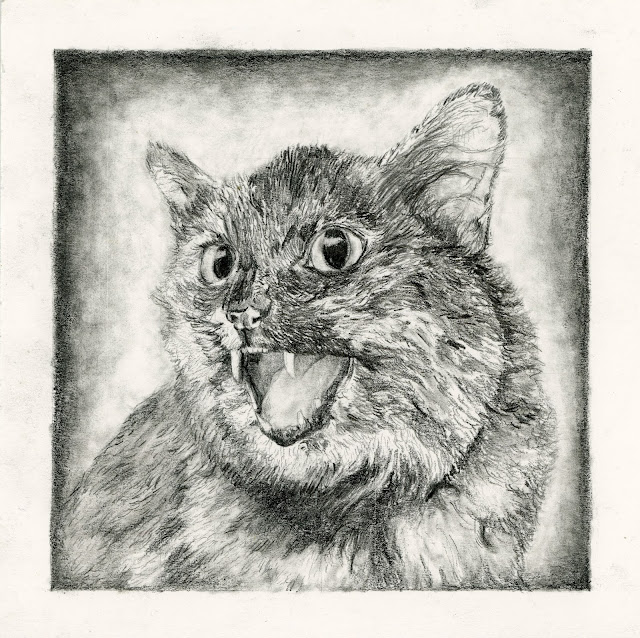 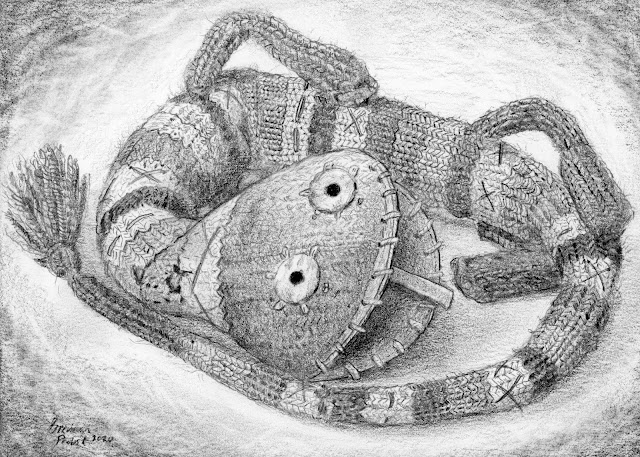 An observational 5x7" graphite pencil drawing of a hand-made yarn lizard from my mom's childhood. After Mom died last year, I really wanted this little guy, but my dad didn't want to give him up at first. After some light pleading, he finally let me have the lizard, and he's been sitting on my shelf ever since. I made this drawing as a gift for my dad on his birthday today, December 15th. I decided to challenge myself a bit and use pencil, a drawing medium I don't typically use. 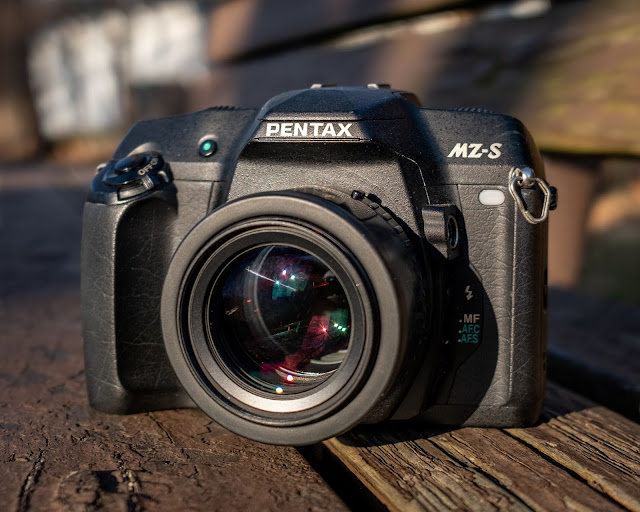 This is my 100th camera spotlight! To celebrate, I bought a somewhat rare, somewhat expensive camera, the Pentax MZ-S. The MZ-S is the last pro-level 35mm camera that Pentax ever made, and was released in 2001, during the twilight years of professional film photography. Listen, until only a few years ago, I actively avoided using any film camera made after 1985, as I hated the plasticy builds, LCD screens, and primitive autofocus systems of the era. This changed after I fell in love with the groundbreaking Minolta Maxxum 7000 camera, which I borrowed on a whim from my wife's grandfather. Since then, I've learned to embrace all that late-80's-to-early-2000's automatic camera goodness.

This neglect of late-century cameras is probably why I only recently heard of the excellent Pentax MZ-S. Now, I love Pentax cameras: along with Nikon, they're my favorite camera company. I own a Pentax 67, 645, MX, and an LX (which might just be the greatest 35mm camera ever made). This adoration of Pentax and a newfound interest in modern film cameras made me pretty curious about the MZ-S, which represents the pinnacle of Pentax's 35mm technology.

The Pentax MZ-S looks pretty bizarre on first glance, and maybe even a tad bit ugly. My wife scoffed at the MZ-S when she saw me using it, and called it a "crappy 90's camera." Suffice it to say she was a bit shocked when I told her how much I paid for it (about $325). The most striking feature of the MZ-S is its top panel, which is slanted at a 30 degree angle toward the photographer. This, in theory, makes exposure information easier to read when the camera is in the "ready" position. From a aesthetic standpoint, however, the slant gives the camera a kind of hunchback vibe., especially when viewed from the front. The MZ-S looks bulky, and from viewing the camera in photographs, I expected it to be massive and heavy, especially since it was touted as a professional camera. I imagined it as being similar in girth to my Nikon F4, but was pleasantly surprised when my MZ-S arrived and I found it to be astonishingly light and compact.

Ergonomics are great, and the camera is easy to operate. The build is mostly solid, except for the back door, which is feels a little flimsy. The MZ-S has a nice grip that makes the camera comfortable to hold, even with just one hand. The on/off switch is located around the shutter release, and doubles as the aperture preview lever, which works well. Shutter speeds are changed by rotating the dial that encircles the the large LCD panel on the top plate. The shutter tops out at an impressive 1/6000th, and goes down to 30 seconds (longer exposures are possible with bulb mode).  There is no mode dial to speak of on the MZ-S, which was a little strange for me at first. For manual exposure, just set your desired aperture and shutter speed with their respective dials. For aperture priority, set the aperture to the desired value, and hit the green button on the front of the camera. For shutter priority, set the aperture to "A," and the select the shutter speed you want to use. For full-auto program mode, set the aperture to "A," and then hit the green button. This system takes a bit to get used to, but it works fine. It also bares mentioning that aperture values are always set via the lens: it is not possible to manually control the aperture with the camera body.

Next to the LCD screen are panel are the metering and drive dials. For metering, there are three options: spot, center-weighted, and average. I mainly stuck to center-weighted, and got perfect exposures every time. Drive mode options include single frame, continuous (2.5 fps), self-timer, and multiple exposure. Now let me tell you, if you're a multiple exposure enthusiast like myself, you will love this camera. For multiples on the MZ-S, there's no fiddling with rewind knobs, or awkwardly holding down levers while trying to re-cock the shutter without advancing the film. All you do is flick the little multiple exposure switch, and the camera will continue to expose the same frame until you switch off of the multiple exposure setting, at which point the camera will immediately advance the film to the next frame. To remind you that you're in multiple exposure mode, the frame number on the LCD will blink. This method makes it easy to make lots of exposures on the same frame in rapid succession. It's so simple! 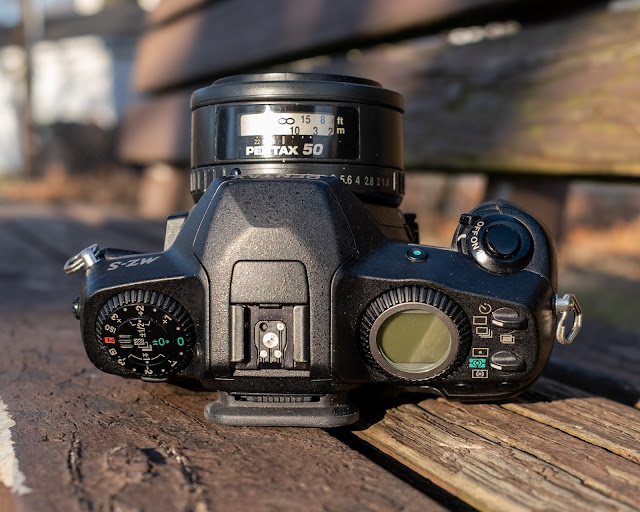 On the opposite side of the prism is the exposure compensation dial. You have to press in on a little button below the dial to unlock it, which is a little fiddly, but keeps the dial from being turned accidentally. Also on this dial is where you can set your ISO manually, if you're not using DX-coded film. On the inside of the compensation dial is another mini dial that can enable automatic exposure bracketing, but I didn't mess around with that function.

The MZ-S has a little pop-up flash that's hidden on top of the prism finder. It's obviously not very powerful, but it's good for fill, or capturing serendipitous indoor moments. The max sync speed is 1/180. You pop it up by pressing a little button on the side of the prism. It never automatically pops up, thank god.

The MZ-S is intended for use with auto-focus lenses. I shot my entire roll with a Pentax-FA 50mm f/1.4. Manual lenses are still usable, of course, but the all-matte focusing screen isn't conducive to manual focusing. There is a little green dot that lights up when the camera believes you've achieved correct focus with a manual lens, but I don't think it's too dependable. The focusing screen is interchangeable, but there are no official screens available with manual focusing aids (split-image or microprism). No, auto-focus is definitely the way to go with this camera. There are six focusing points to choose from, and you can even let the camera choose the point automatically if you're trusting of early 2000's algorithms. I just stuck with the center point. I do wish the points lit up, as they are hard to see if shooting in dim light. Focusing is very quick, and can even keep up with moving subjects! I had a few shots miss focus, but this may have been user error, since I'm only just getting used to the camera.

Overall I can say I'm definitely a fan of the Pentax MZ-S. I do wish it took less expensive batteries, as a the required pair of CR2 batteries set me back over twenty bucks. I'm not sure if I'll hold onto this camera or not, but the multiple exposure function alone may be worth keeping it around for a while. Below are a few more photographs I made with the MZ-S, using the FA 50mm f/1.4 lens and Ilford Delta 400 film. 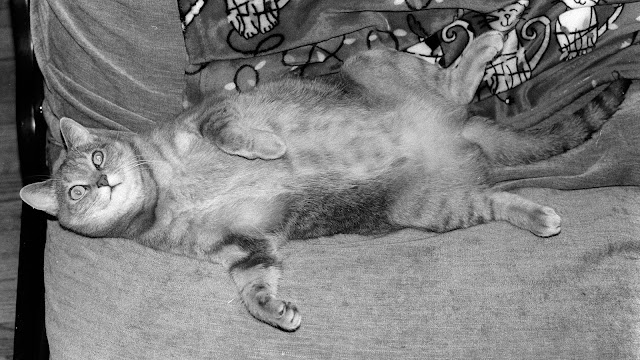 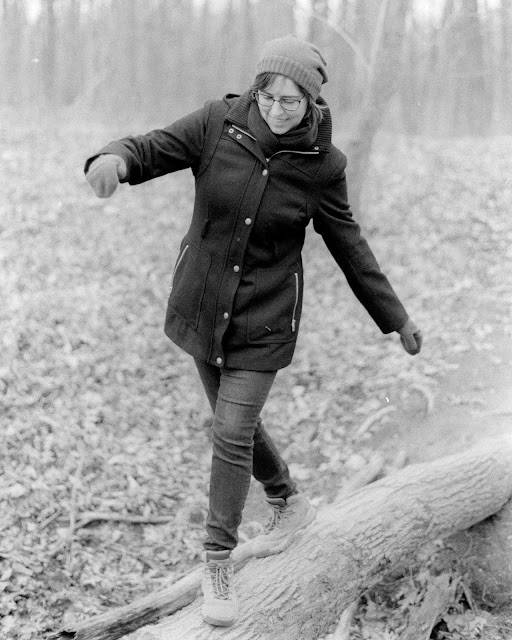 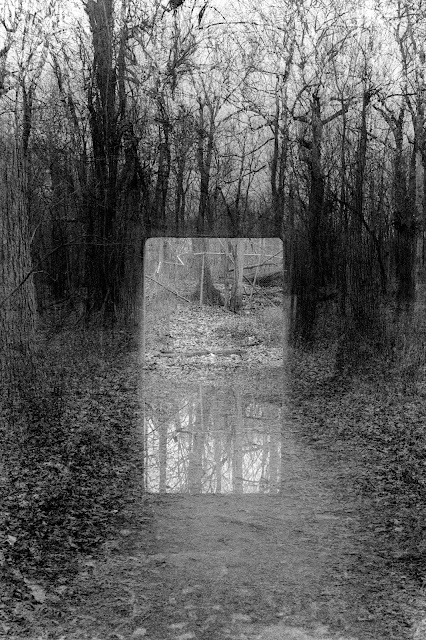 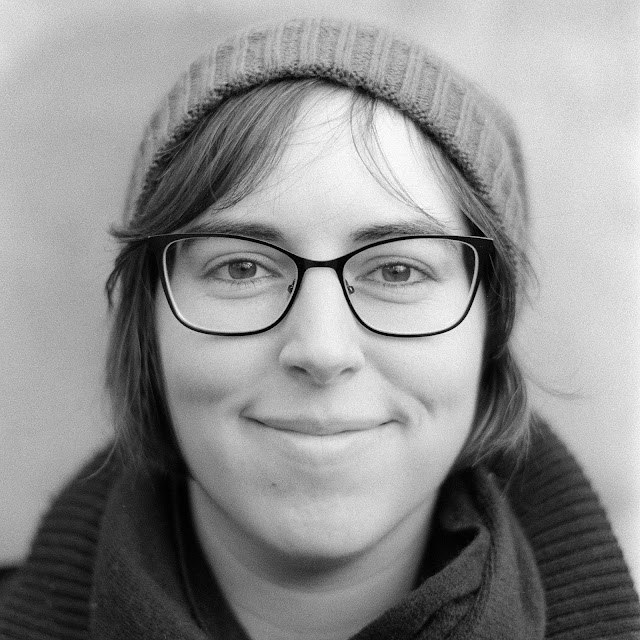 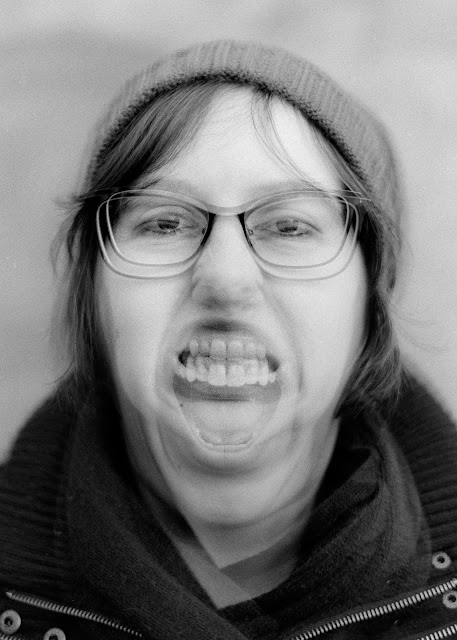 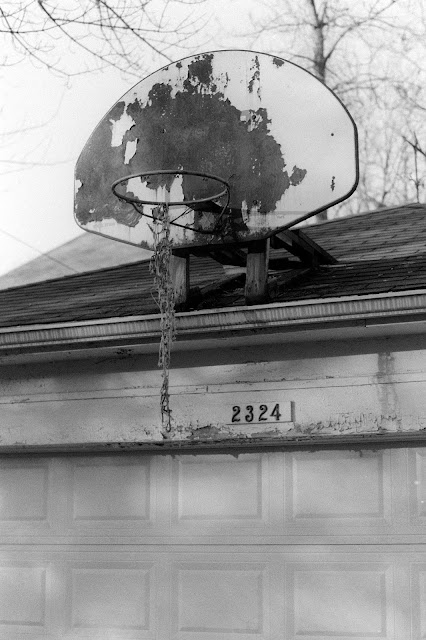 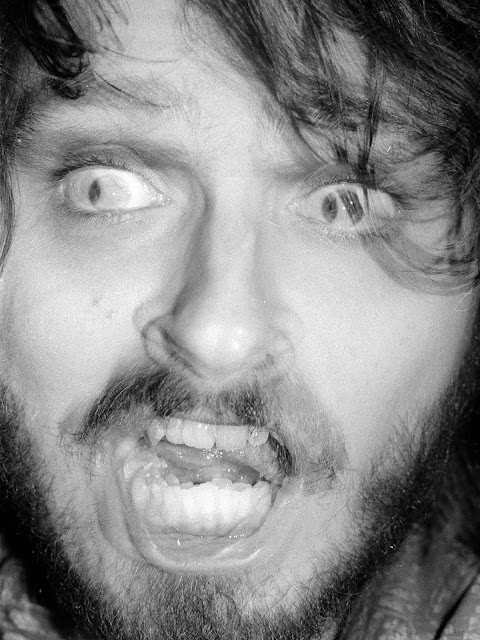