Collage: "The Way of the Empty Hand" 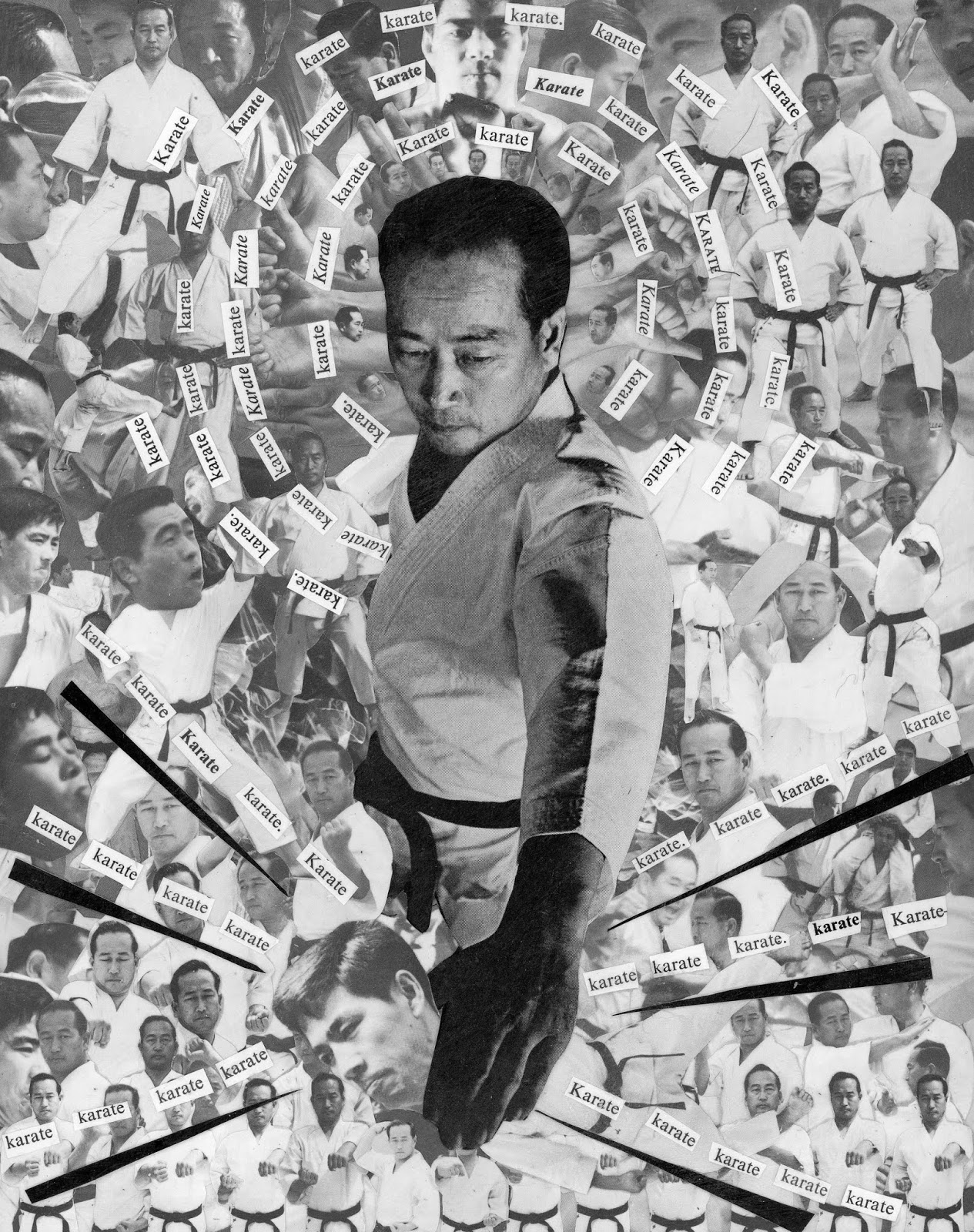 All collage material was taken from the late Masatoshi Nakayama's 1966 instructional book, Dynamic Karate.
Posted by Brennan at 6:12 PM 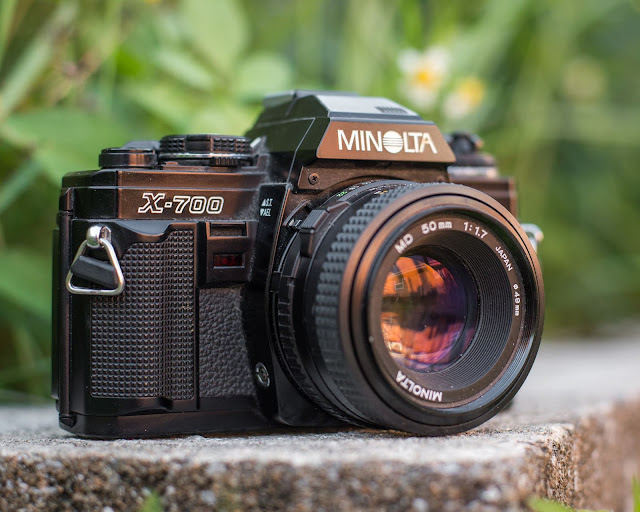 The Minolta X-700 is Minolta's final flagship manual-focus camera. It's a relatively lightweight and compact SLR with an electronic shutter that works in manual and aperture priority exposure modes, and also sports a program mode. Minolta released the camera in 1981.

I would classify the X-700 as a semi-pro or advanced amateur camera. It's certainly well-made, but lacks the modular aspects of the era's professional cameras, such as the Nikon F3 or Pentax LX. For instance, with the X-700 it is not possible to swap out viewfinders or focusing screens. I would compare the X-700 more-so to Nikon's FE series of cameras, though Minolta's offering is slightly worse, in my opinion. While the X-700 is by no means a bad camera, I believe it has some odd shortcomings. There are better 35mm SLR's out there at the same price point ($100-150).

For one thing, I almost always dislike manual film cameras that require batteries to function. I understand the advantages of an electronic shutter mechanism, but I just hate worrying about batteries. The X-700 requires two 357-type button batteries. Most electronic cameras have a mechanical speed to fall back on just in case (usually around 1/60th or 1/125th), but the X-700 does not have this feature. If your batteries die, you're stuck with a paperweight.

While the viewfinder in the X-700 is one of the brightest out there, the display is lacking for an 80's flagship camera. There is a window that shows your current aperture setting, which is great, but the viewfinder does not show you what shutter speed you currently have selected. All it shows you is what shutter speed the meter believes you should use. You are forced to take your eye away from the finder and look at the shutter dial to make sure you have the correct speed. Better 80's cameras like the Nikon FE and Pentax LX show both your current selected speed and the meter's suggested speed so you can easily set the correct exposure. 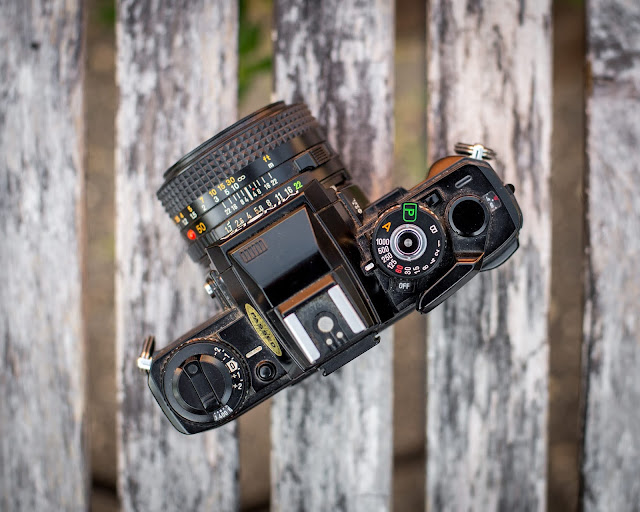 Though I know this is not a huge deal for most people, I hate how the X-700 has no multiple exposure feature. Multiple exposures are a large part of my work, and it's always so disappointing when a camera leaves out such a simple feature.

One last gripe. You can't use a cable release!

I know I'm being a negative Nancy. See, the X-700 is a fine camera, but its frustrating shortcomings keep it from being a classic in my book. If you want a truly great manual-focus Minolta camera that no one ever talks about, I strongly suggest the SRT Super. Below are some photos I made with the X-700 and Kentmere 400 film. 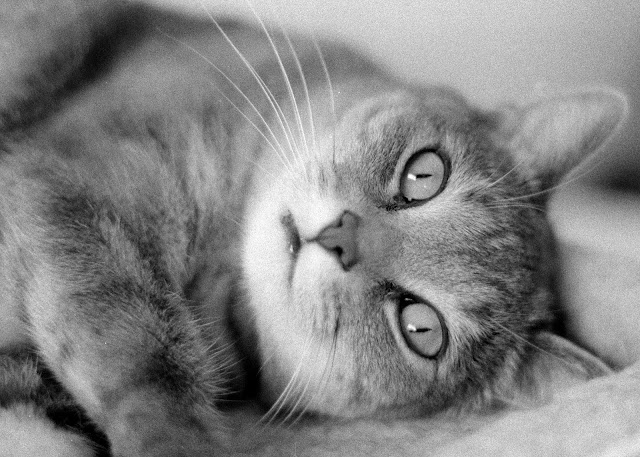 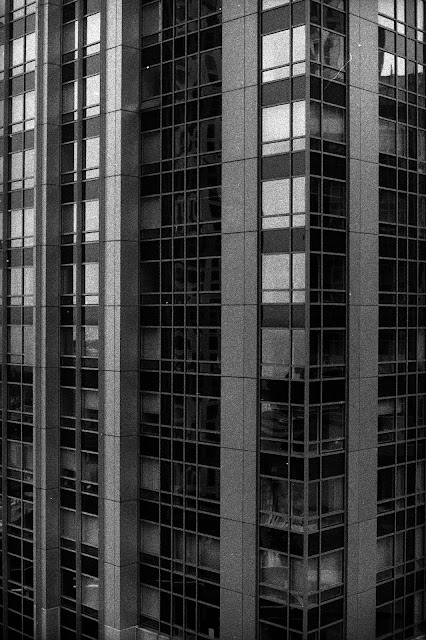 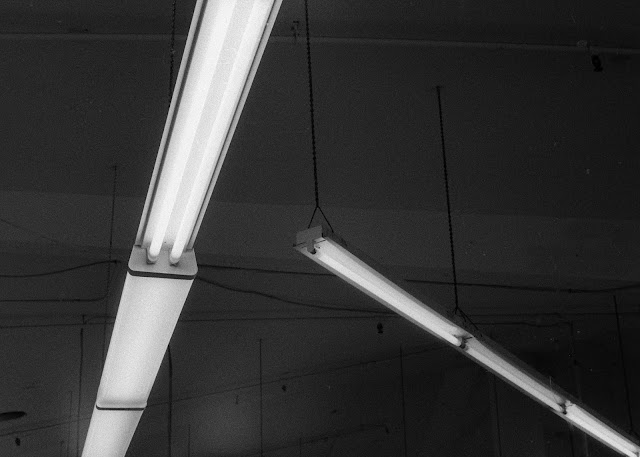 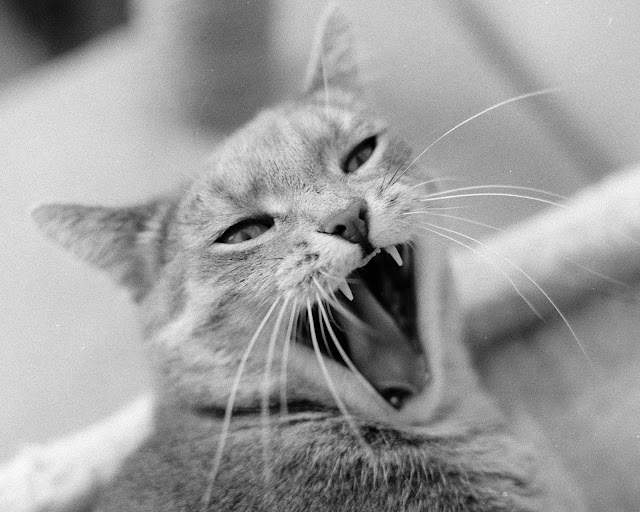 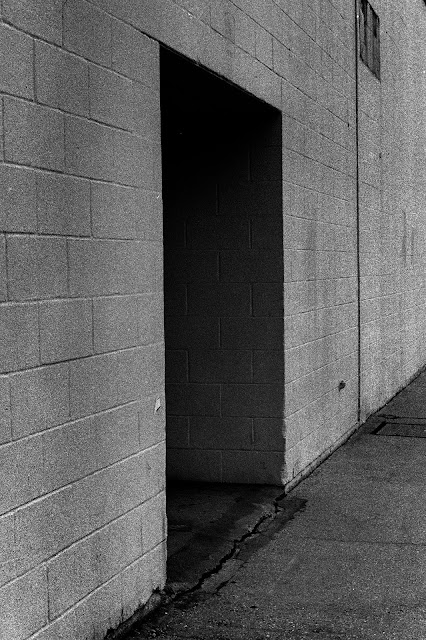 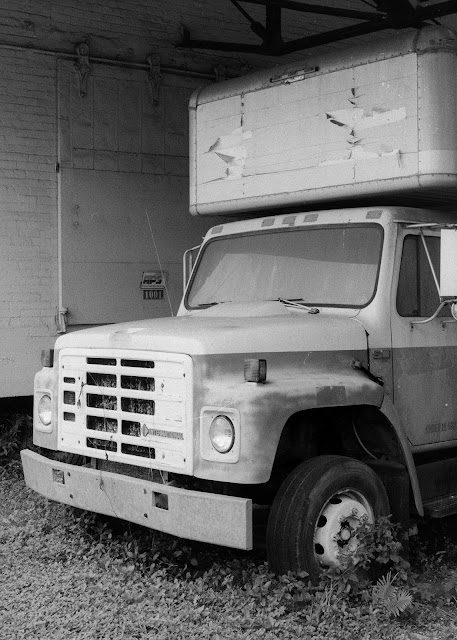 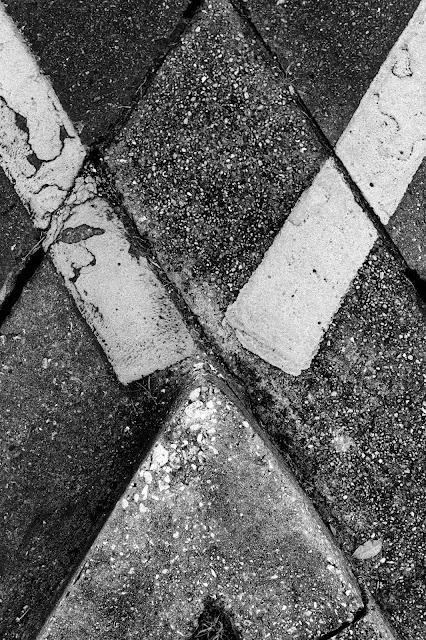 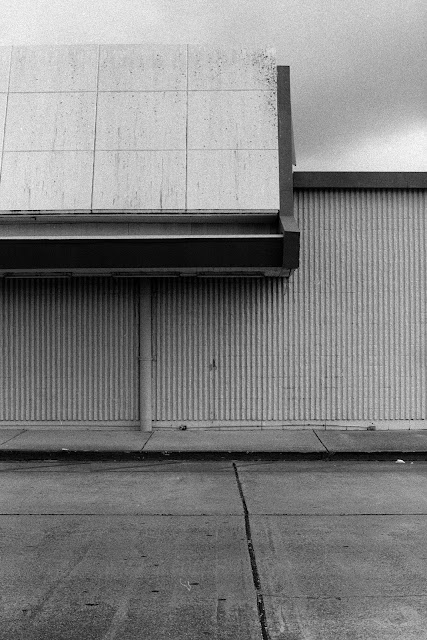 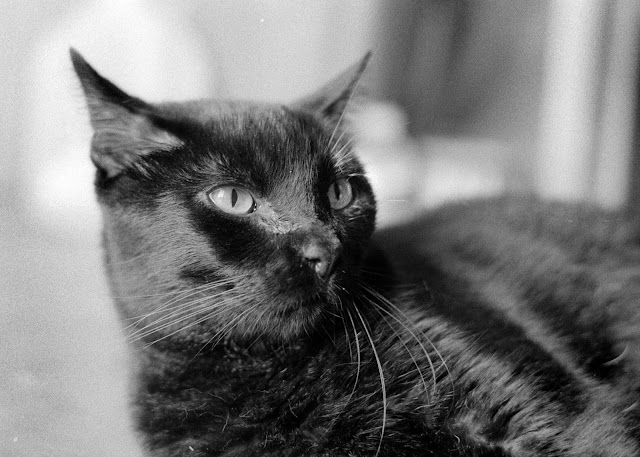 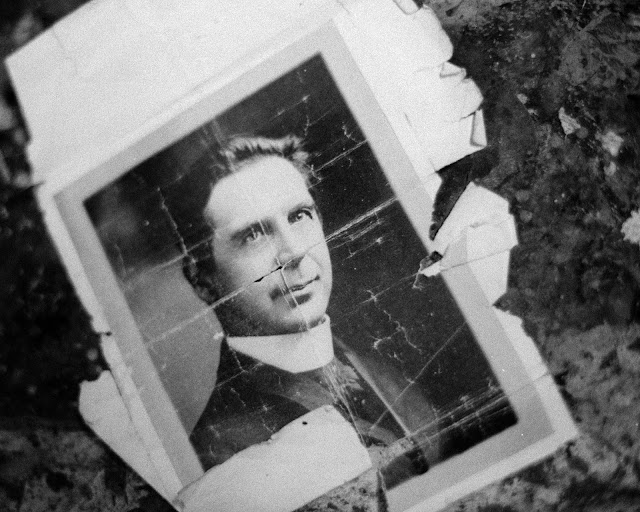 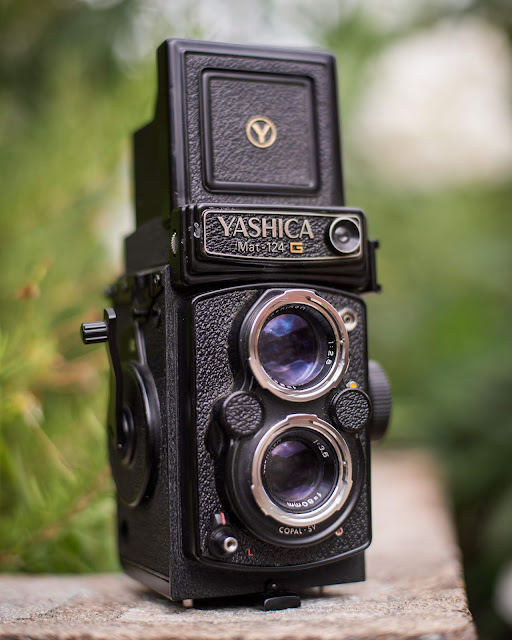 Released in 1970, the Mat-124G is the last twin lens reflex camera Yashica ever produced. While the Mat-124G lacks some advanced features, it's a well-made camera and is rather small by medium format standards. It's a solid choice if you desire to try out a twin lens setup, but don't want the extra weight of a Mamiya C330, or are afraid to break the bank with a Rolleiflex.

Let's get the negative out of the way. For me, the Mat-124G possesses two major caveats. Firstly, the camera cannot focus close (only up to a meter) without a clumsy, now-hard-to-find adapter, which makes portraiture and other genres of photography challenging. Secondly, multiple exposures are impossible to perform, which is a huge bummer for me.  If you don't care about either of these limitations, then the Mat-124G could be the perfect twin lens camera. 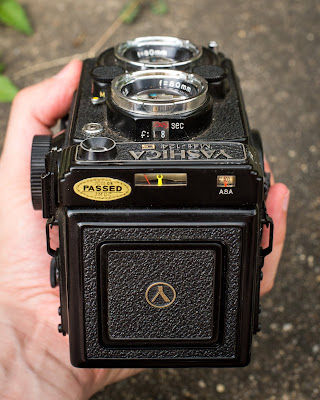 Ergonomics are excellent, and make for quick, simple operation. All exposure information is easily viewable during waist-level operation. Aperture settings (f/3.5 ~ f/32) and shutter speed settings (1 ~ 1/500) are viewable through a window on top of the lens. These exposure settings are adjusted via twin dials to the left and right of the lenses. The match-needle light meter (ISO 25 ~ 400) is also conveniently located on top of the camera in front of the lens hood, though the meter takes outdated 1.3V mercury batteries. Focusing is achieved by rotating a knob with your left hand, while the shutter release is tripped with you right index finder. The matte focusing screen is not the brightest, but it's good enough in decent light, and I've seen much worse. As standard for most waist level finders, there is a pop-out magnifier for critical focus. Other features include an automatic crank advance, and a self-timer for when you want to get in the shot, or don't have a cable release handy for tripod work. 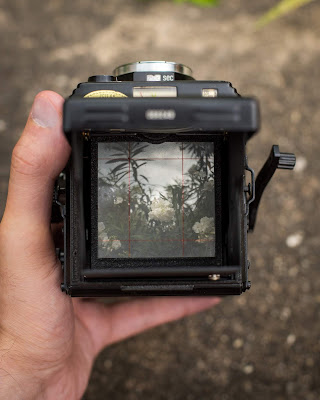 Did I mention the Mat-124G is small? Below is a size comparison with my Mamiya C330. It's really not any heavier or larger than a typical 35mm SLR. 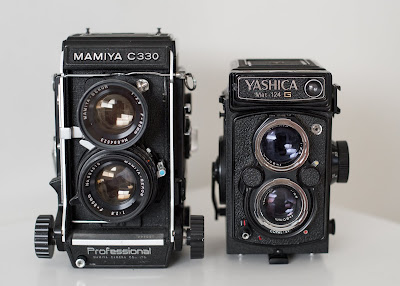 Below are some photographs I made with the Mat-124G and Kodak TMax 400 film. I'm really impressed at the sharpness of the lens, even when shot wide-open at f/3.5. 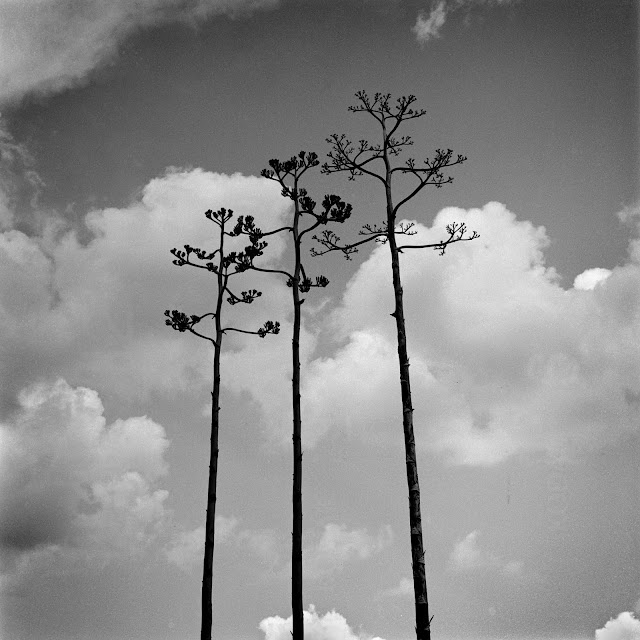 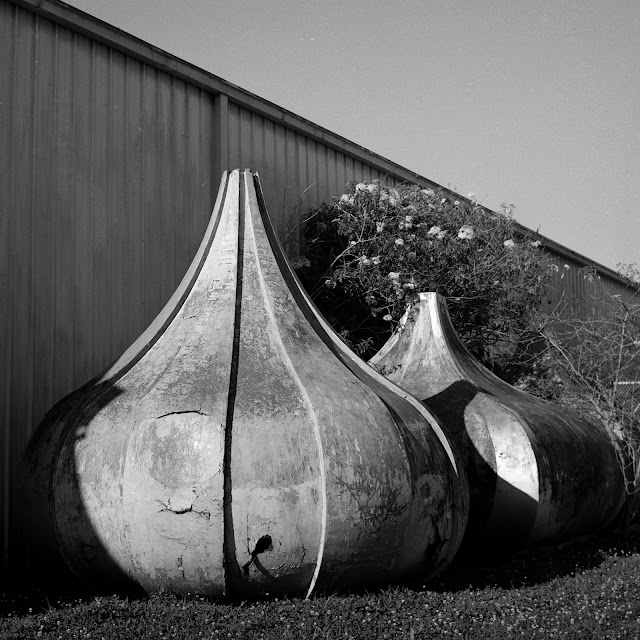 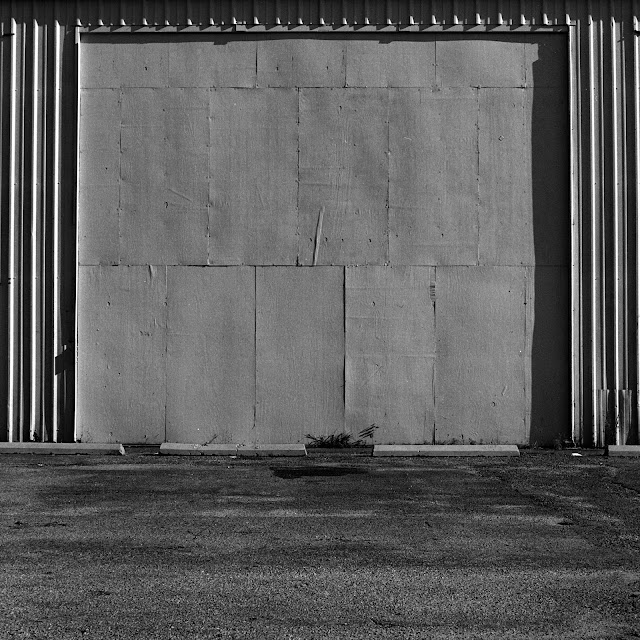 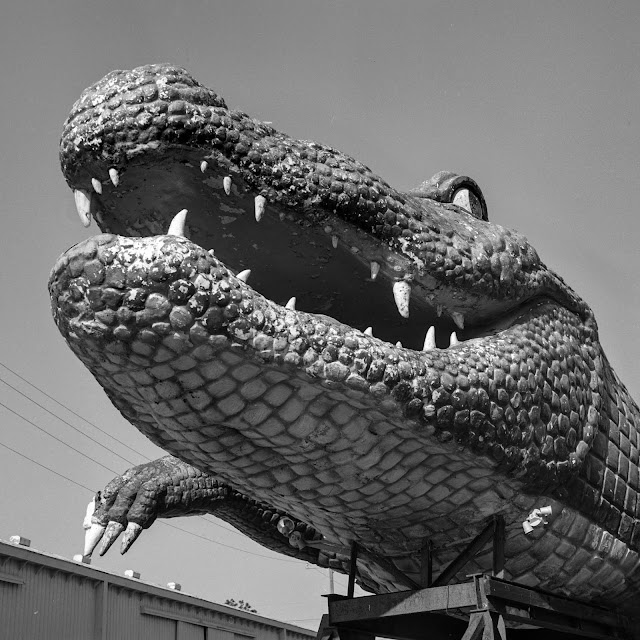 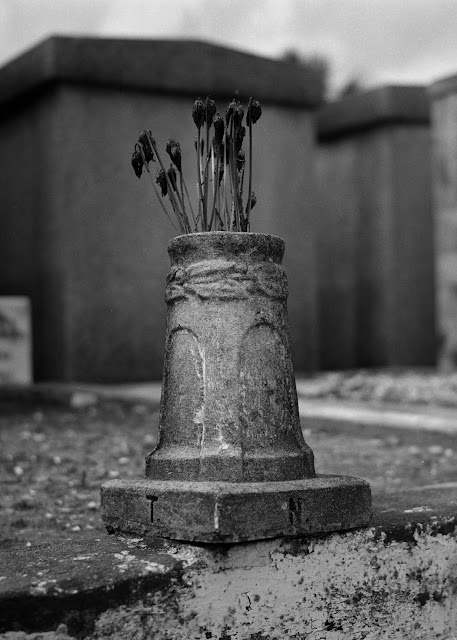 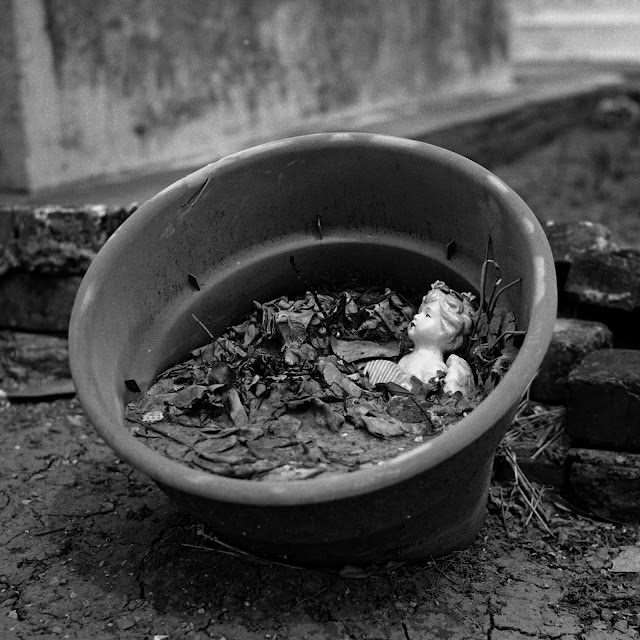 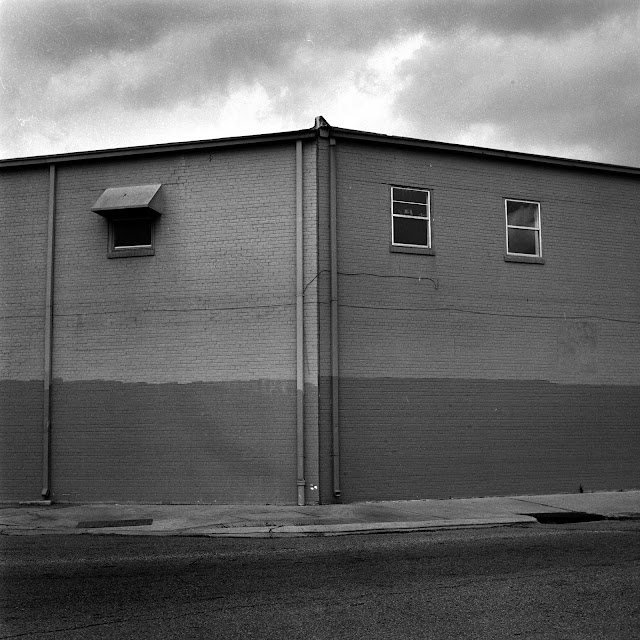 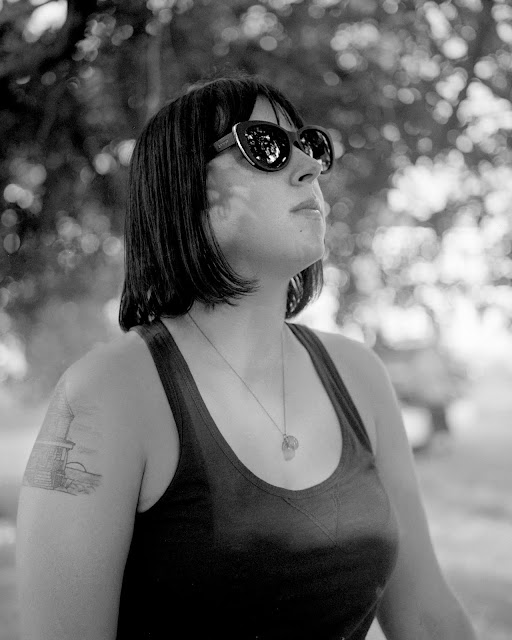 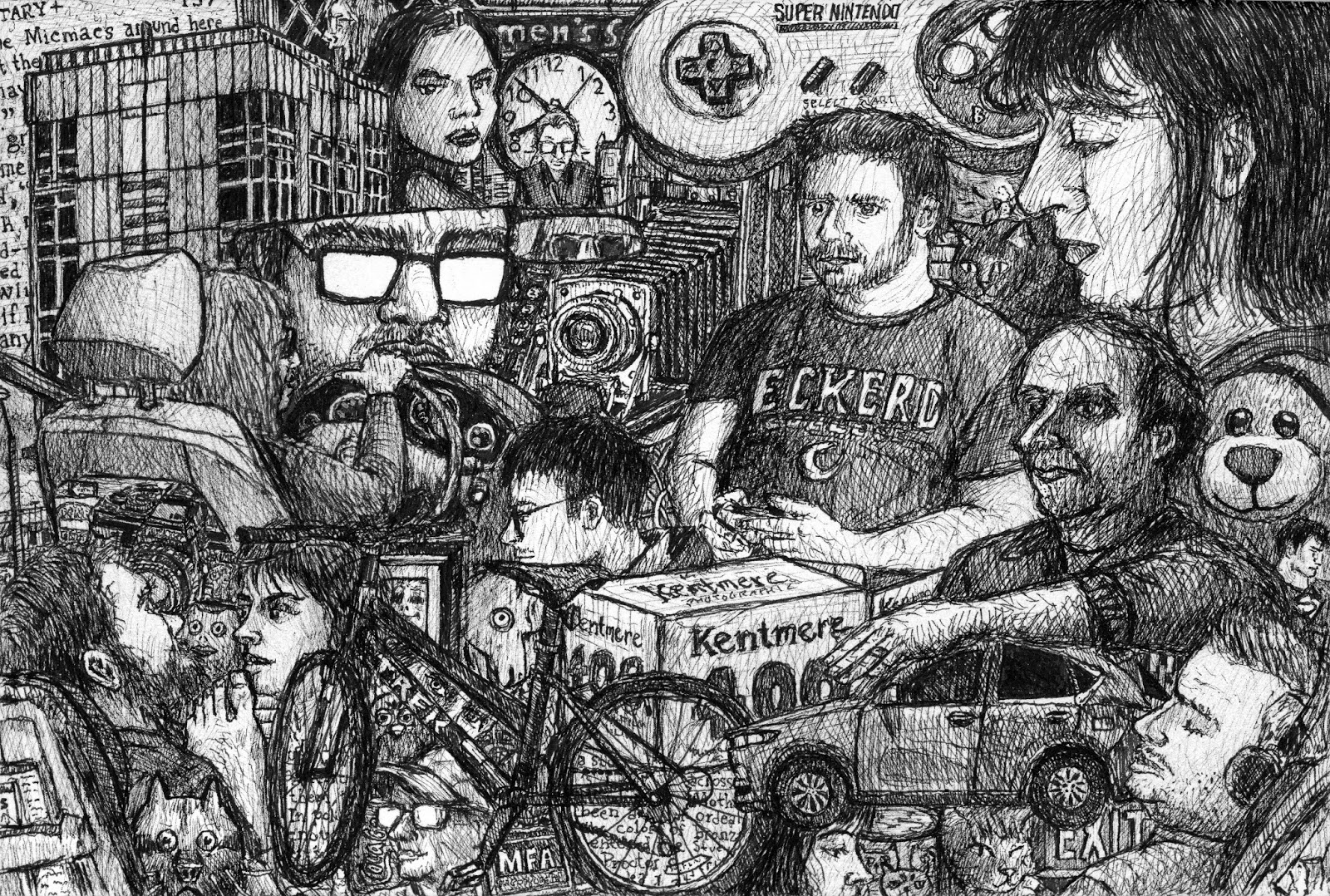