I like the Nikon F4 quite a bit. I made a spotlight for it almost exactly five years ago, which can be viewed here. A couple days ago, at an estate sale, I found a Nikon F4s in great condition. Besides a thin little cosmetic crack on the viewfinder, it seems near-mint!

So, what's the difference between an F4 and an F4s? Turns out, it's the battery pack. When the smaller MB-20 pack is installed on the camera body, it's known as an F4. When the beefier MB-21 pack is attached, the camera becomes an F4s. Besides these swappable battery packs, the cameras themselves are the exact same.

While the F4s setup is larger than the standard F4, and takes an additional two batteries (6 vs. 4), you do get some cool added features. With all that extra battery power, the F4s can shoot at an impressive (for 1988) 5.7 frames per second, quite a bit faster than the 4 fps of the standard F4. Though the F4s is huge for a 35mm camera, the MB-21 does afford it a vertical grip, which makes framing portrait-oriented photographs much more pleasant. I actually prefer the handling of the F4s to the F4, as long as I don't have to carry it around with me very far! 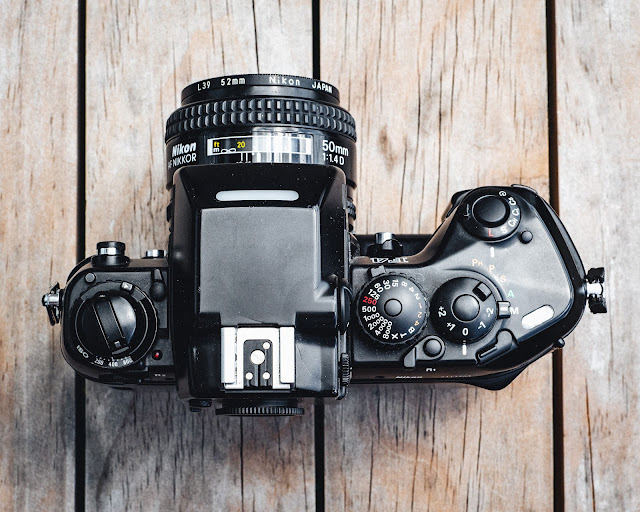 I took my F4s out with me to photograph what it was designed to photograph: sports. My vintage base ball team, the Chicago Salmon, had a game in Valparaiso this past weekend, and I captured some of it on film. Overall I was impressed with the results. As I was in daylight for the entire shoot, the autofocus worked very well. Most of my photographs came out acceptably sharp, and very well exposed. While I don't think the F4s could keep up with faster, more unpredictable sports like soccer or basketball, for baseball it definitely sufficed.

There is one thing about the F4 that bugs me though, which is that it will not shoot at its fastest frame rate while in "single" autofocus mode. It will only shoot at the full 5.7 fps when in "continuous" or "manual" focus modes. At first I thought my new F4s was not working properly, but my other F4 operates the same way. I guess in "single" mode, the camera needs to make sure it is properly focused between each exposure, so it refuses to shoot at its fastest speed. Kind of annoying, but you can work around this by using the AF-L (autofocus lock) button while in continuous mode. It's just an extra button you have to press.

Speaking of buttons, that's also one of the reasons why I love the F4s. It's the most advanced autofocus 35mm camera to not have an LCD screen. There is a physical switch or dial for every single function, which some people may hate, but I find engaging. While I like my F5, which is leaps and bounds above the F4s in terms of technology, I can't help but be drawn to the mini switchboard that is the top of the Nikon F4s. I love being able to see all the settings on my camera at a glance without having to dive into any menus, or even turn the camera on. No, the F4s is nowhere near as capable as the F5, but it has way more charm, and is more rewarding to operate.

I originally intended to sell this F4s and make a quick buck, but I think I'll hold onto it for a while. Maybe I'll even shoot some more games with it. Enjoy the rest of the photographs I made with my F4s. I used a Nikon 80-200 f/2.8 D lens, and Ilford Delta 400 film.

This Winter, I was able to catch up and create a few more portraits of new and returning members of the Chicago Salmon Base Ball Club. All portraits are 6"x6", graphite pencil on bristol paper.

This year I am trying to keep a daily visual journal, where I make one photograph per day. I tried keeping a written journal a couple years ago, which lasted for about eight months before I fell off the wagon (though I do still write in it from time to time). I hope to complete this photographic diary and turn it into a book at the end of 2022.

A 6"x6" pen drawing of my brother's dog, Dr. Noodle Von Lobster. I finally got to meet him for the first time over the holiday, and he's quite the gentleman!
Posted by Brennan at 8:55 PM