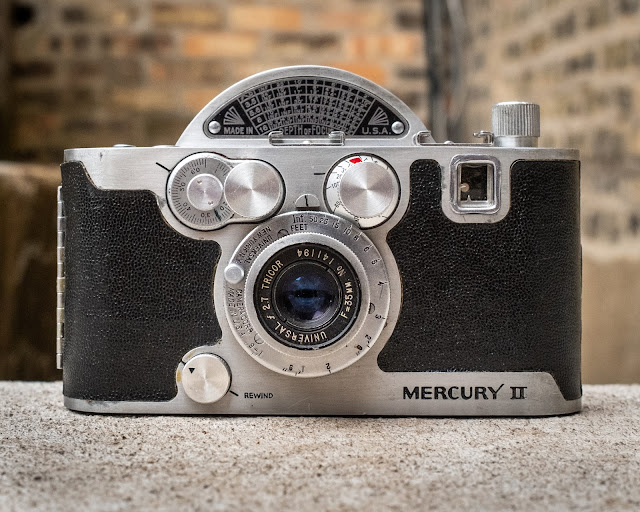 The 1945 Univex Mercury II is objectively, hands down, one of the coolest looking cameras ever made. Plus, it's made in the U.S.A! I've always admired the look of this camera, ever since I first spied it sitting on a "not-for-sale" shelf in a camera shop many years ago. I finally came to own a Mercury II when my parents bought one for me for my birthday (or was it Christmas?) a few years back. It's been sitting prominently on display in my home ever since. I never tried it out before because I didn't think the shutter was working properly. However, it's been staring at me longingly for some time now, so I decided to finally give it a chance.

Though somewhat large in size, the Mercury II is a half-frame 35mm camera. So, you get double the amount of exposures on a roll of film, and the negative size is 24"x18".

The big iconic hump on top of the Mercury II is actually part of the housing for the camera's unique disk shutter. It spins at speeds from 1/20 to 1/1000 of a second, which was pretty impressive for 1945. B and T settings are also available. It's neat to open the back of the camera and watch the shutter disk whip around. The lens on the Mercury II is technically interchangeable, but the camera is pretty much designed to be used solely with its standard 35mm f/2.7 lens. It's basically a fixed-lens camera. For a viewfinder camera, the lens focuses quite close -- about 1.5 feet! 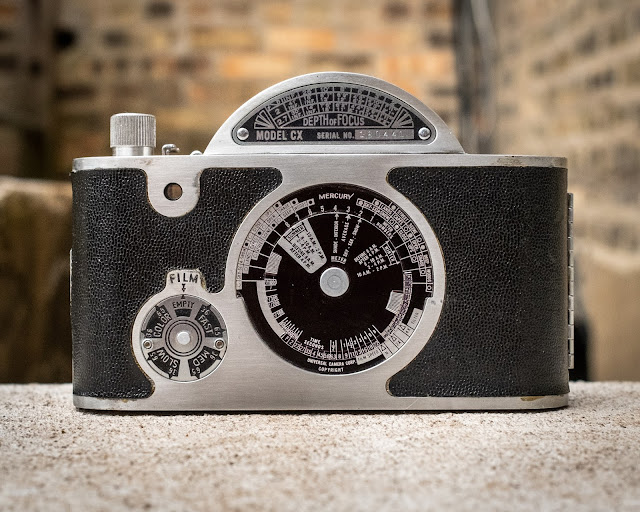 Ergonomics on the Mercury II are awful. The viewfinder is painfully small, though this is pretty par for the course by 1940's standards. The worst part about using the camera is that most of the main controls are located on the front of the camera, facing away from the photographer. This setup makes the camera look rad and steam-punky, but also totally awkward to operate. You have to turn the camera around toward you to change anything, as you can't see the settings while holding the camera in a normal shooting position.

There are two accessory shoes on top of the camera, where you can attach a flash, light meter, and/or uncoupled rangefinder. Instead of a rangefinder, I used my Fuji X100V, which says in the viewfinder what distance it's focused at. I'd autofocus with the Fuji, read the distance scale, then transfer that distance rating back to the Mercury II.

Overall, the beautiful yet clumsy Mercury II feels like a prime example of "form over function." I made some photographs with the camera, but the results aren't impressive. That being said, I really didn't expect much. I made some photographs of my cat, Furiosa, wearing the cone of shame (she has an eye ulcer, poor baby). The film is Kodak Tri-X 400. 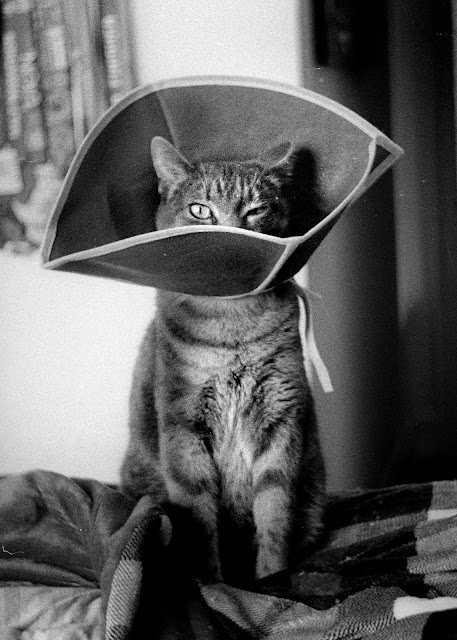 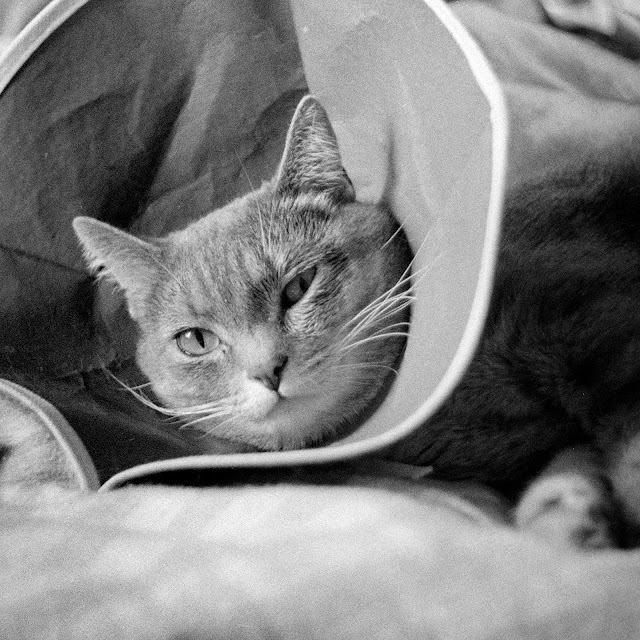 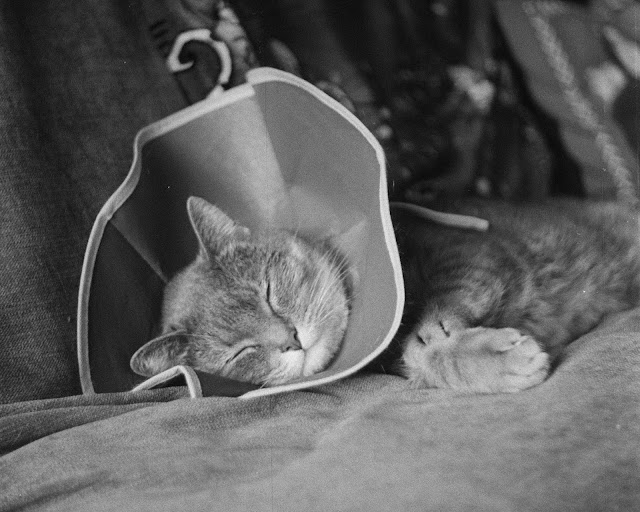 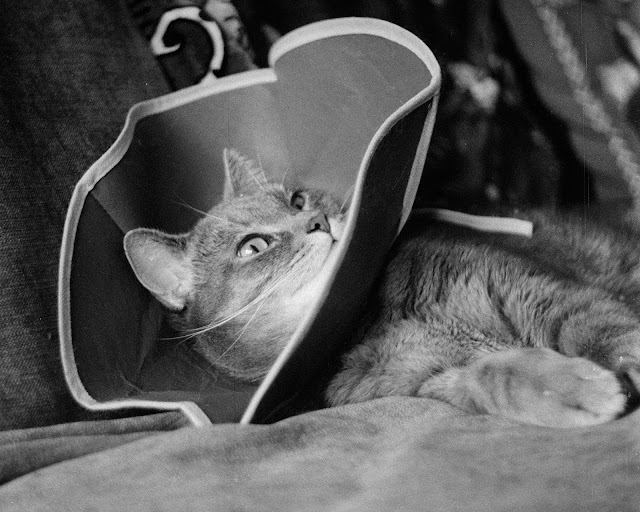 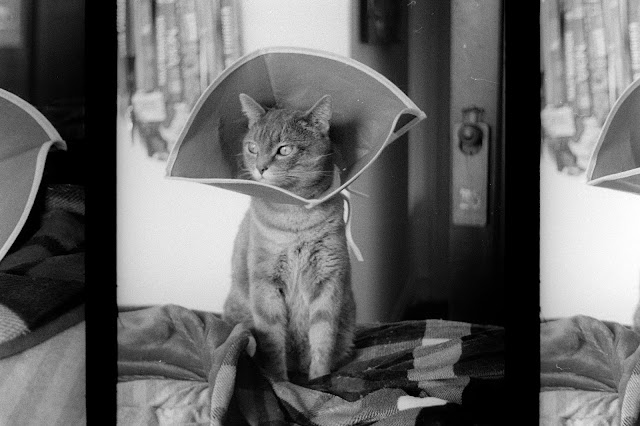 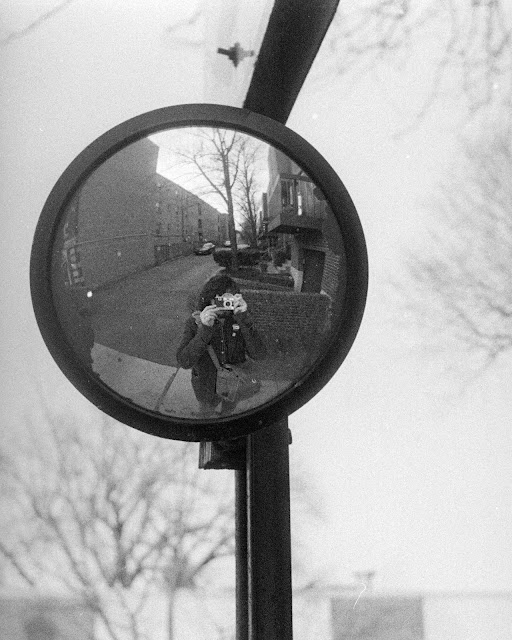