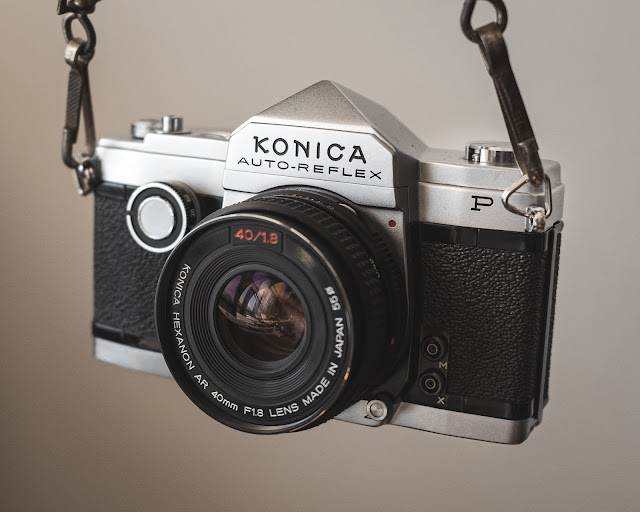 Half-frame cameras are pretty rad; you get twice the amount of frames on a roll than with a full-frame camera. However, sometimes you want more image quality than those tiny 18x24mm half-frame negatives can offer. What if you could switch between half and full-frame exposures on the fly, without having to change cameras? Well, that's where the gimmick of the Konica Auto-Reflex comes into play. Released in 1965, the Konica Auto-Reflex is the only camera that can switch between half and full-frame formats mid-roll.
I bought the P version, which came out a year later 1966, and is the same as the original camera in every way except it doesn't have an internal meter, and the rewind knob is a different styling. But, who needs a light meter, anyway? 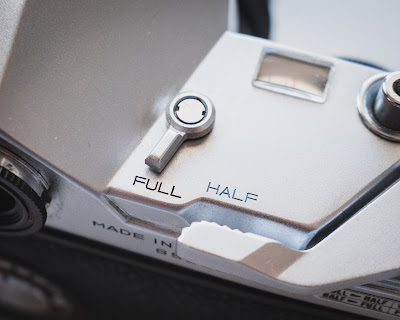 Immediately noticeable on top of the camera to the right of the prism is a little switch that toggles between "Full" and "Half." Flipping this switch changes the size of the negative. As you can see below, little metal curtains pop out between the shutter curtain and film plane to form an 18x24mm negative. There are lines etched into the focusing screen to help you compose your half-frame images (or preview what they might look like while still in full-frame mode). When in half-frame mode, black arrows appear at the top of the focusing screen to help remind you.

This may be obvious to most, but keep in mind, that the field of view changes when switching between formats. The field of view of the 40mm f/1.8 lens I used with the camera became around a 60mm equivalent when I switched to half-frame. 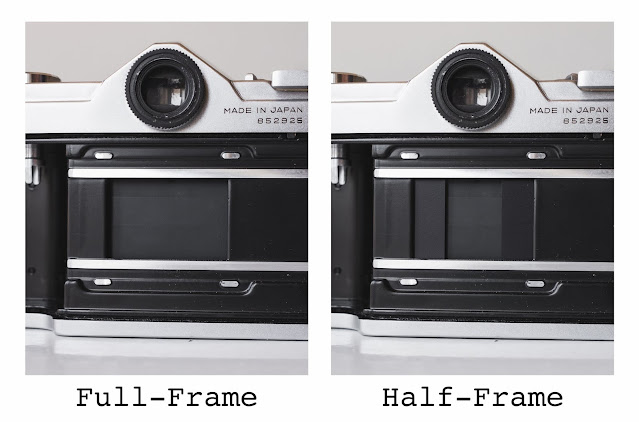 In addition to changing the negative size, the Full/Half switch also changes how far the advance lever advances the film, and how frequently the frame counter counts frames. With "Half" selected, the frame counter only ticks up once every two shots. A cool little detail! Below is what a roll of film looks like, after switching between full and half-frame multiple times.

Besides the ability to switch between formats, the Konica Auto-Reflex is a pretty standard 60's SLR. Shutter speeds (1~1/1000 + B) are selectable via a knob on the front of the body. There's a self-timer, which also locks up the mirror for less vibration, which is a nice touch. The viewfinder is frustrating for eyeglass users such as myself, as your eye pretty much has to touch the finder to see the entire focusing screen. With my glasses between my eye and the finder, I can probably only see about 3/4 of the frame. The focusing screen has decent brightness with a large microprism assist, and is not interchangeable. Build quality is about average. The Konica doesn't feel cheap, but it isn't nearly as robust as a Nikon or Pentax from the era.

Below are a few photographs I made with the Auto-Reflex P, using a 40mm f/1.8 Hexanon and Ilford Delta 400 film. 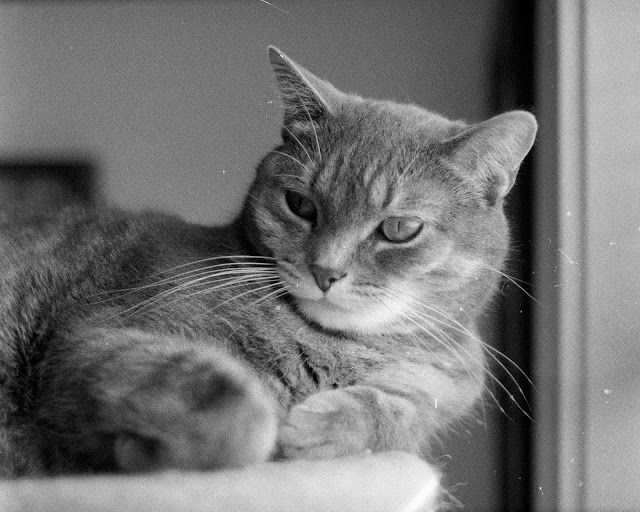 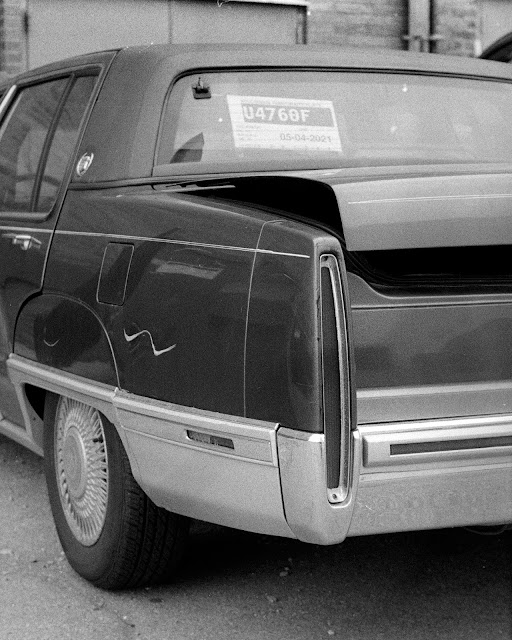 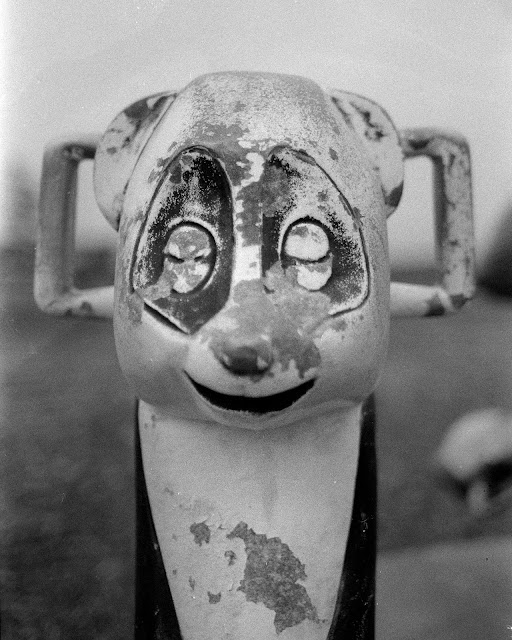 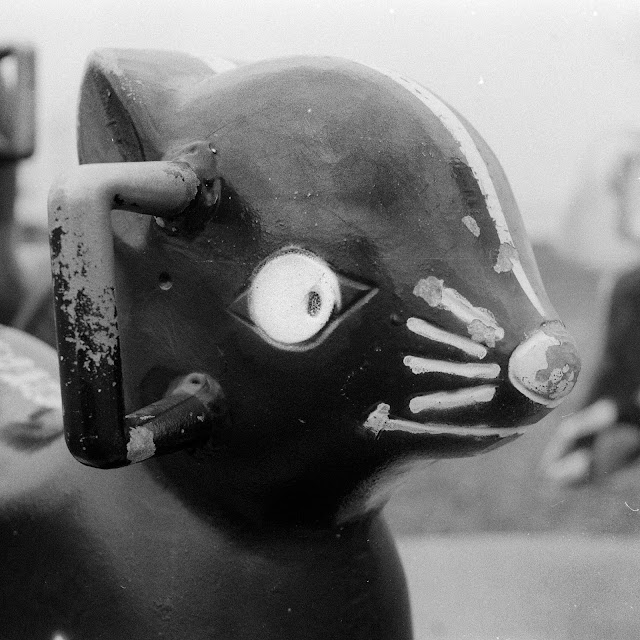 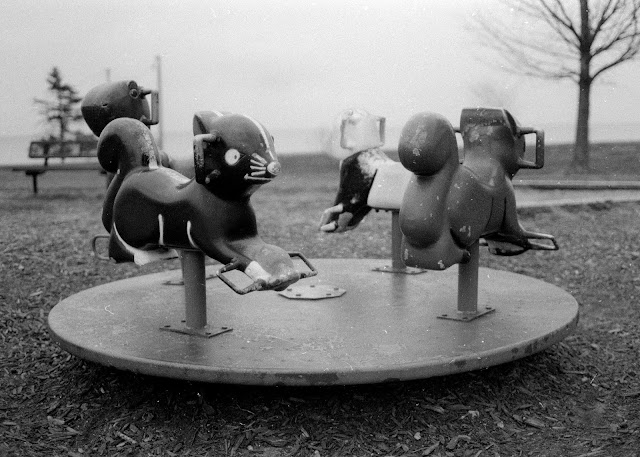