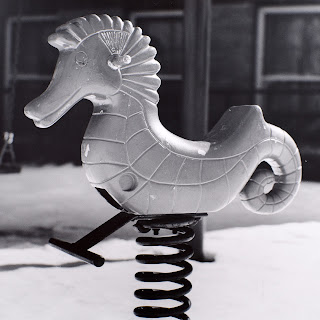 Spring Riders! I love 'em! Galesburg and Monmouth, the old towns I went to school in, had a bunch of these little ride-able creatures. In fact, I did a whole series on them my senior year. Back in the burbs, they're much harder to come across. I finally spotted a few of them in a school playground while driving to work one day in Chicago, and I knew I had to come back and photograph them. So, last Sunday I drove down and found them again. Luckily, there were no children playing in the park... that could have been sketchy. I would've looked like a complete perv with my big medium format camera.

The light was, to put it nicely, complete bulls**t.  It was a very sunny day with very harsh light, and the playground was mostly in dark shadow. I wasn't about to drive back empty handed, so went ahead and took the shots. This seahorse was the only spring rider in direct sunlight, which can be just as bad as heavy shade. He was completely backlit, so I overexposed by one stop. Luckily, the negative turned out pretty nice! I used my Mamiya C330 with a 105mm lens.

I'm happy with the final print. There's one little flaw behind the horse's butt, and another in the snow, but hey... film's film!